Residential site near Santry village guides in excess of €1m

Planning permission for demolition and replacement with 53 apartments and parking 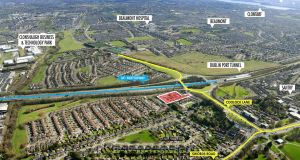 A residential site of 0.76 of a hectare (1.88 acres) a short distance from Santry village, Dublin 9, is expected to be of interest to housebuilders when it goes for sale from today.

Peter Garrigan of CBRE is guiding in excess of €1 million for the site at Lilmar Avenue, which has full planning permission for the demolition of part of an industrial building and its replacement by 53 apartments – 14 one-beds, 37 two-beds and two three-beds – as well as 70 underground car parking spaces.

The development site is located close to the M1 motorway and the Dublin Port Tunnel. It is also within easy access of schools, shops, restaurants, bars and parks.

A family investment fund has purchased the Golden Discs store at 80-82 Patrick Street, Cork, for about €4 million. The investment has been owned for some years by the IPUT pension fund.

Edmund Douglas of Lambert Smith Hampton is believed to have advised the new owners, who will have 209sq m (2,260sq ft)at street level and a further 139sq m (1,503sq ft) on the first floor.

Eoin O’Morain has been appointed chairman of Scott Tallon Walker Architects. He succeeds Niall Scott, who has been in the role for the past eight years.

Mr O’Morain takes over at an exciting time for the firm as it prepares to hand over the newly redeveloped Miesian Plaza, formerly the Bank of Ireland headquarters, on Dublin’s Baggot Street, to owners Remley Developments. It also starts work on the new air traffic control tower at Dublin Airport and a new 50,000sq ft commercial development on Harcourt Road for Green Property REIT.

The firm, which has a separate UK office, is midway through the construction of a £200 million (€187 million) building at University College London Hospital, in central London. The building will house the UK’s first Proton Beam Therapy unit – a type of radiotherapy – that will bring the latest technology in cancer treatment to Britain as part of a state-of-the-art 200-bed cancer hospital.

UK investors have completed the purchase of a Georgian building at 25 Merrion Square and 25 Denzille Lane, Dublin 2, for €3.8 million – €300,000 above the guide pride.

The selling agents managed to rent the vacant mews building on site during the marketing campaign, pushing the rent roll out to €247,000 and the net initial yield to 6.22 per cent. The tenants include DLS Capital Management, The Reputations Agency, Tech Skills Resources, Astec Global and the Irish Red Cross. There are 17 car parking spaces on site.

Brian Gaffney of Murphy Mulhall said there was strong interest in the landmark property, which had the potential to add to the current rental income through upcoming rent reviews and ongoing asset management.

Richard Bielenberg of Colliers International is guiding €800,000 for an office investment at 8 The Mall, Beacon Court, Sandyford Business Park, Dublin 18.

The mid-terrace unit is located within an enclosed glazed mall and extends to 303sq m (3,268sq ft) over three levels. The property comes with a large south-facing roof terrace and five basement car parking spaces. The facility is leased to Newmarket Information (Publications) at a passing rent of €72,000 with 12.10 years to run on the lease.

Meanwhile Colliers International and Cohalan Downing are guiding €1 million for a vacant stand-alone office building, Ardrostig House, at Bishopstown, Cork. The building has a gross internal area of 785sq m (8,460sq ft) and car parking at basement and surface levels. The agents say that suburban rents at the peak of the market have been exceeding €236 per sq m (€22 per sq ft).

At this point proceedings were adjourned and after a brief discussion between the auctioneer and the vendor, the property was declared “on the market”. The brisk bidding quickly recommenced between two parties and the mini estate was eventually knocked down at €402,000 – almost €25,000 per acre – to a local businessman with equine interests.