Ned's pub in Dublin city may be turned into budget hotel 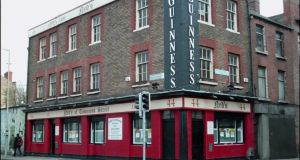 The application will involve the demolition of all of the existing buildings at the Dublin 2 location, which include a garage and the well-known Ned’s pub

Irish investment group Tetrarch has lodged a planning application with Dublin City Council for a €65 million commercial development in the capital that will include a budget hotel, a restaurant, an aparthotel and 21 apartments.

The application has been made by a company called Brigante Investment Ltd for a 0.4 hectares site bounded by Moss Street, Gloucester Street South and Townsend Street.

It will involve the demolition of all of the existing buildings at the location, which include a garage and the well-known Ned’s pub.

Tetrarch is seeking to build an eight-storey budget hotel with 393 bedrooms and related facilities. Its plans also include an aparthotel of 202 units in two blocks providing frontage on to all three streets, a large ground-floor restaurant on the site of Ned’s pub, and an apartment block of 21 units on Gloucester Street.

The apartments will be a mix of one-bed and two-bed units and will be handed over to Dublin City Council on completion. The local authority owns some of the land being used in the overall development and is expected to use the units for social housing.

The development will also include vehicle access access via Moss Street on to Bracken’s Lane, and Gloucester Street South, bicycle parking, solar panels and landscaping.

Subject to planning permission being granted, works are expected to commence on site in 2018 with the scheme being completed in 2020. Tetrarch has engaged MCA Architects to design the project.

With tourism in the city booming, Tetrarch sees this as being a prime site for the development of budget accommodation. The location is only a short walk to Trinity College, the docklands area, Temple Bar and O’Connell Street.

This will mark Tetrarch’s latest venture into the hotel sector. It set up Tetrarch Hospitality in 2015 to provide services to owners, investors, investment funds and financial institutions in Ireland.

It operates and asset manages more than 1,600 bedrooms in Ireland with close to 1,800 employees around the country.

Hotel assets include the five-star Marker in Grand Canal Docks, Citywest in Saggart, Co Dublin, the Clonmel Park Hotel in Tipperary, Mount Juliet in Kilkenny, and Powerscourt in Enniskerry. It also controls the Jacobs Inn hostel in Dublin and received planning permission last year from An Bord Pleanála for a 158-bedroom hotel on Sackville Place, close to O’Connell Street. This property is due to open in the first half of 2018.

The group recently listed the 170-acre Mount Wolseley hotel and golf resort in Carlow for sale, seeking offers of €14.25 million.

Brigante was set up in August 2015. Its directors include Michael McElligott, Tetrarch’s chief executive, and Damien Gaffney, who heads its hospitality division.

1 Stripe lures Dhivya Suryadevara from General Motors to be CFO
2 Revised help-to-buy scheme opens for applications
3 Revolut losses tripled before Covid-19, despite rise in users
4 AIB concedes Covid-19 mortgage policy was ‘regrettable’
5 ‘No demand... because there are no people’ at well-known Dublin pub
6 Divorce: What will it cost and can you afford it?
7 Transferring the family farm without a tax headache
8 Nearly 30,000 could lose pandemic payment if they do not confirm eligibility
9 Management of Irish PR group Drury acquire agency from Omnicom
10 CityJet exits examinership after High Court ruling
Real news has value SUBSCRIBE