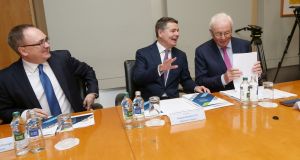 The National Asset Management Agency (Nama) could seek partners within weeks to build thousands of new homes on one of the Republic’s biggest development plots.

Nama, which bought Irish banks’ boom-era property loans in 2010 following the crash, predicted on Thursday that it would earn €4 billion surplus once its work was complete and pay this to the State in 2020 and 2021.

Chief executive Brendan McDonagh said Nama would begin seeking partners to develop Poolbeg West in Dublin, which will hold 3,500 new homes, “in the next six to eight weeks”.

Nama controls 15 hectares of Poolbeg West, a vacant site just east of Ringsend that is the biggest of the capital’s remaining development areas.

“It has been described as one of the best sites in Europe, ” said Mr McDonagh. “We think there’s a lot of international interest in it.”

He stressed that Nama would not develop the site, but fund a partner or partners to do the work. Some 900 of the new homes are earmarked for social housing.

The agency controls land in Poolbeg that once housed the old Irish Glass Bottle factory.

A consortium including developer Michael McNamara and State body the Dublin Docklands Development Authority bought the Irish Glass Bottle site in 2007 for €412 million. Nama bought the debt associated with the site from the now defunct Anglo Irish Bank after the property crash.

Announcing the agency’s results on Thursday, chairman Frank Daly remarked that if someone had told him 10 years ago that it would earn a €4 billion surplus once its work was finished he would have said that was “highly desirable but impossible”.

The Minister for Finance, Paschal Donohoe, noted that the Government had pledged to the European Commission that Nama would be wound up once its work was complete. “The commitment that I made to the commission will be met and will be honoured,” he said.

However, Mr Donohoe indicated that Nama would continue its work beyond 2020, when it was originally due to to be wound up, as it still held assets of value to the State. This will mean finding a replacement for Mr Daly, who steps down as chairman in December.

Nama reported on Thursday that its post-tax profit grew 65 per cent last year to €785 million.