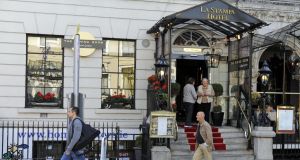 AIB sold La Stampa restaurant and night club for €17.5 million despite a €21.5 million offer from an investor recruited by the business’s owner, Louis Murray, the Commercial Court heard yesterday.

AIB’s receiver, Declan McDonald of PWC, sold the restaurant, hotel and bars, Samsara and Tiger Becs, at 35 and 36 Dawson Street, to Tetrarch Capital in 2015 for €17.5 million.

Mr Murray and his company Bailieborough Spring Water are suing AIB and Mr McDonald, saying they broke an agreement to suspend the sale while he sought new backers to repay the business’s debt.

Plaintiffs’ counsel John Fitzgerald, said AIB sold the property for less than the debt, “leaving a balance of €3 million” due from the former owner, who also lost earnings as a result.

According to Mr Murray, Olympia Capital, run by businessman Edward Dunne, offered to pay €21.5 million for the business before the Tetrarch deal and keep him as a shareholder.

Mr Murray bought the property in the 1980s after returning from London. He opened La Stampa and a hotel, adding the bars later.

Mr Fitzgerald recounted that the business ran into trouble during the recession, while a cancer diagnosis worsened Mr Murray’s troubles in 2011.

In 2013, AIB met Mr Murray to discuss the €19 million La Stampa then owed the bank. He appointed a son-in-law, John Quinn, as a director and engaged former banker Bernard Somers to aid in clearing the liability. He later enlisted another son-in-law, Shane Woods, a corporate finance specialist with Deloitte.

AIB appointed Mr McDonald in October 2014, which the plaintiff says broke an agreement that they seek a “consensual sale” after the following Christmas to clear the debt. The lender subsequently disputed this with Mr Somers.

The court heard that Brehon Capital (a predecessor of Tetrarch) offered €22 million for the property in late 2014 and the parties used that over succeeding months to garner further interest.

Relations between Mr Murray and Mr McDonald soured. Mr Woods told the court that at one point when he sought permission for Mr Murray to show a potential investor the property, the receiver replied: “F*** Louis, I don’t really need to help him.”

“ I got the impression he was enjoying the power,” Mr Woods recalled. He later acknowledged to AIB’s counsel, Lyndon MacCann, that this exchange came after Mr Murray had told staff that he would sue the receiver.

According to Mr Murray’s counsel, another bidder, Opportune Capital, offered to buy the debt for €19.8 million in April 2015. On the 28th, Olympia offered €21.5 million. Mr Woods agreed with Mr MacCann that Olympia originally appeared to have believed that the business was generating €3 million cash a year, when the real figure was possibly “€1 million or €500,000”. However, Mr Woods said that he made it a priority to correct this.

Mr Murray provided AIB with proof that Olympia could fund its offer by an agreed deadline of May 5th. The court hear that at that meeting, AIB staff told him La Stampa would not be sold. However, the lender advertised the property for sale the following day, it heard.