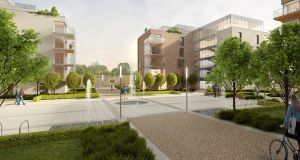 Pat Crean’s Marlet Property Group has secured a €33 million financing facility with AIB to fund the construction of up to 142 apartments on a site it owns in south Dublin.

The monies will be used to develop a mix of one- and two-bedroom units at Marlet’s Walled Orchard scheme at Wyckham Way in Dundrum. While the development, which is under construction currently, will cater predominantly to demand from Dublin’s fast-growing private rented sector, a portion of it has been set aside for social housing. This follows Dún Laoghaire-Rathdown County Council’s acceptance of an offer from Marlet to sell 11 apartments to it for €3.458 million. The 11 units being acquired by the local authority will comprise seven one-bed apartments ranging in cost from €241,446 to €262,441, and four two-bed apartments ranging in price from €414,657 to €430,404.

Quite apart from its mix of apartments, the Walled Orchard will also have some 2,149sq m (23,132sq ft) of public open space including a play area, seating and pond features.

News of AIB’s financing of the project comes just seven weeks on from Marlet’s €93 million sale to German fund Patrizia AG of 166 apartments at its Mount Argus scheme in Harold’s Cross, Dublin 6W. Both developments are notable in terms of their timing, coming as they do in the midst of the uncertainty thrown up by the Covid-19 crisis.

Commenting on the State-backed lender’s support for the Dundrum scheme, Marlet CEO Pat Crean said: “This is our first financing transaction with AIB and we are delighted that the bank has demonstrated such confidence in our business, particularly given the challenging economic environment. Marlet continues to develop our significant portfolio of residential schemes and the Walled Orchard in Dundrum will set a new benchmark for quality in the market.”

AIB had a significant role to play in the transaction, being the sole lender to the deal.

Derek O’Shea, head of land and development within the bank’s real estate finance division said: “AIB is committed to playing a vital role in home building in Ireland. We are delighted to support Marlet in this transaction, which will ultimately deliver much needed high-quality housing units in Dublin 14. We look forward to working with Marlet again.”

The Walled Orchard is one of two significant residential schemes which are set to come on stream on lands which previously formed part of the Carmelite order’s original 50-acre Gort Muire estate in Dundrum.

Irish house builder Lioncor Developments is pursuing a proposal which could see the development of up to 730 apartments on the eight acres immediately adjacent to Marlet’s Walled Orchard site.

Both apartment schemes are located beside the Carmelites’ house at Gort Muire and adjacent to St Tiernan’s Community School. They also sit within close proximity to the 636 apartments developed at Wyckham Point and Wyckham Place in the mid-2000s by Gerry Haughey’s Dorville Homes and Galway-based O’Malley Construction, and within a short distance of Dundrum Town Centre.

1 My aunt never told us that Gran passed away with no will
2 Ryanair and Aer Lingus cut flights as travel restrictions continue
3 Private investors acquire prime Dublin 2 assets as lockdown lifts
4 Green light for 1,102 residential units on Old Naas Road
5 Watchdog warns of major fiscal challenges with growth to slow to 1%
6 The $6bn judgment pitting Nigeria against Irish businessmen
7 If it’s safe to do so, could this be the time to spend for Ireland?
8 Republic risks becoming ‘Europe’s North Korea’ on air travel, says Aercap chief
9 Political row brewing if Ireland loses its appeal on Apple
10 Ireland’s age of retirement must be pushed out, watchdog warns
Real news has value SUBSCRIBE