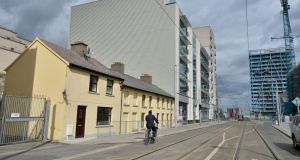 Johnny Ronan’s Ronan Group Real Estate (RGRE) is considering a plan for the development of a new boutique hotel in Dublin’s north docklands.

Should it proceed the proposed hotel on Upper Mayor Street would see the demolition and replacement of a row of five terraced houses which the developer purchased recently for €3.8 million. The overall value of the portfolio was driven by its location immediately adjacent to RGRE’s Project Waterfront site.

Ronan’s company Waterside Devco No 1 Limited is understood to have exchanged contracts with Birr-based Niamh Garry last December to buy 34, 36, 37, and 38 for €3.54 million, and with her family member, Brendan Garry to buy number 35 for €260,000. The Garry family run the well-known short-stay accommodation business Canbe.

RGRE’s plan for the delivery of a boutique hotel on the Upper Mayor Street site is not entirely surprising when one considers its close proximity to the Project Waterfront development.

Located on 4.6 acres next to the 3 Arena and the Point Village, Project Waterfront comprises two adjacent sites with existing planning permission for 420 apartments and 300,216sq ft (27,891sq m) of offices distributed across four blocks.

The number of residential units within the development could yet increase substantially. Following a review of building heights within the Dublin Docklands Strategic Development Zone last year, RGRE entered into, and remains in pre-planning discussions with Dublin City Council with the aim of increasing the number of apartments to 1,000 units distributed across two towers rising in height to 44 and 40 storeys respectively.

At 155m the taller of these blocks would be more than three times the height of Liberty Hall (51m), and nearly twice the height of the 88m (22-storey) tower on Tara Street for which Ronan secured planning permission in 2019.

RGRE is aiming to develop offices, retail units, hotel accommodation, rooftop parks and a “sky garden” as part of the Waterfront project.