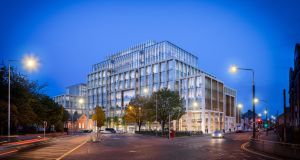 Developer Shane Whelan’s Westridge Real Estate has submitted a planning application for what may become the first of Dublin’s “pandemic-proofed” office schemes.

While the impact of Covid-19 and other such viruses can’t be fully minimised or eradicated in the absence of an effective vaccine, Whelan’s plan for the redevelopment of DIT’s former Kevin Street campus has been future-proofed by architects, Henry J Lyons, to allow the occupiers of its office space to respond quickly to changes in business practices such as headcount growth and contraction, new ways of working necessitated by phenomena such as Covid-19, and changes in team sizes.

Westridge’s plan for the 1.44 hectare (3.57 acre) site, which it acquired for €140 million in August 2019, envisages the development of 53,110sq m (571,671sq ft) of office accommodation in two 11-storey blocks alongside 299 apartments distributed across three buildings of up to 14 storeys in height. The proposal also provides for the delivery of a new public square and cafe at the centre of the scheme, a creche with play area, a community space available to the public and a double-height extension to the existing Kevin Street Library.

In terms of its environmental impact, the Kevin Street redevelopment has been designed to meet the latest environmental, sustainability and digital connectivity standards. The buildings will carry a BER A3 energy rating and are being designed to target LEED platinum certification, (BREEAM outstanding equivalent), a WIREDSCORE platinum rating, and a WELL building gold standard.

An independent economic assessment of the Kevin Street redevelopment by consultants EY suggests it will create a total of 1,216 jobs across the Irish economy during the construction phase of the project (2021-2025), and deliver a total economic impact of €738.7 million, with €74.9 million of this going directly to the exchequer.

Upon completion in 2025, EY estimates the Kevin Street scheme will create a total of 7,645 full-time jobs, and deliver an annual exchequer impact of €156.3 million. The total economic impact of the redevelopment is being estimated to be in the region of €1.9 billion.

Westridge’s purchase of the site was backed by a number of New York-based high net worth family offices. Debt finance for the deal was provided by Fairfield Real Estate Finance led by Chris Wilson and BentallGreenOak which was led by its Dublin-born vice-president Allen Crampton.

While the figure paid by the developer represented a premium of 75 per cent on the €80 million price guided by Evan Lonergan of Knight Frank when he brought the property to the market on behalf of DIT’s successor, Technological University Dublin, the site is acknowledged as being one of the best redevelopment opportunities to have been offered for sale in the capital in recent years. The former DIT campus is located just 300m from the Luas Green Line stop at St Stephen’s Green, and sits within walking distance of the city centre.

1 Four things that could help Ireland escape the Covid-19 recession
2 Ross O’Carroll Kelly column 'not racist towards English people'
3 Brown Thomas and Arnotts shoppers will be able to book time slots for entry
4 What is in the EU’s €750bn recovery plan and how will it affect Ireland?
5 Irish banks’ failure to innovate could leave them written off for good
6 Tax and the Pandemic Unemployment Payment: Your questions answered
7 Job losses in tourism and retail in Dublin could be permanent, new report warns
8 Paschal Donohoe sees consumer ‘prize’ in slow reopening of economy
9 Irish economy to contract by 12%, ESRI forecasts
10 Beware of the rush to get back to normal business amid Covid-19
Real news has value SUBSCRIBE