US tech giant could have capacity to add 3,000 jobs if it strikes deal with Iput 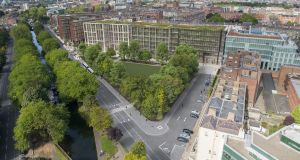 A computer-generated image of Wilton Park in Dublin 2. The scheme is being developed by Iput.

LinkedIn looks set to follow the lead of Google, Facebook and Salesforce, through the creation of a major campus for its European headquarters in Dublin. The move could give the professional networking company capacity to add more than 3,000 jobs.

The US-headquartered tech giant is understood to be in talks with Iput with a view to entering into a long-term lease on a further 32,500sq m (350,000sq ft) of office space the Irish property fund is set to deliver between 2020 and 2023 at its Wilton Park scheme in Dublin 2.

Should the parties agree a deal for the offices at Two, Three and Four Wilton Park, it would pave the way for LinkedIn to grow its Dublin employee headcount by more than 3,000 workers in the medium to long term. A spokesman for Iput declined to comment on the matter when contacted by The Irish Times.

LinkedIn already employs more than 1,200 people at its existing European headquarter offices at Wilton Place. Earlier this year, the company signalled its intention to increase that number to 2,000 by summer 2020. The 800 additional employees are expected to be accommodated within the first block of Iput’s Wilton Park scheme. Extending to 13,935sq m (150,000sq ft), One Wilton Park is due for completion in late 2020.

Iput secured planning permission for Two, Three and Four Wilton Park from An Bord Pleanála in July. All told the three blocks comprise a total of 41,800sq m (450,000sq ft) of space comprising the 32,500sq m (350,000sq ft) of offices LinkedIn is aiming to secure, along with cafe, restaurant and retail facilities at ground-floor level. The wider Wilton Park development will be centred around a public square. The entire scheme is expected to cost around €350 million to redevelop.

Iput has gradually acquired the four properties and adjacent sites over the past decade with a view to developing the quarter as a whole.

The Wilton Park estate includes the former Fitzwilton House, now One Wilton Park, whose former tenants include the Australian embassy and William Fry solicitors, and Wilton Park House, formerly let to the IDA.

Iput acquired the adjoining Lad Lane apartments for €10 million in September 2015; and Gardner House from Kennedy Wilson in November 2017. Iput had previously owned Gardner House, selling it to a consortium for €83 million in 2006.  In 2014, Kennedy Wilson acquired the property for €45 million. Iput paid the US-headquartered real estate firm around €60 million to secure ownership of the building once again in 2017.

Assuming LinkedIn follows through on its objective to create a self-contained campus for its EMEA (Europe, Middle East & Africa) operations at Wilton Park, the company would occupy a total of 64,100sq m (690,000sq ft), once its current 17,650sq m (190,000sq ft) Wilton Place office is factored in. That overall footprint would come close to equalling the 65,000sq m (700,000sq ft) Facebook’s new European campus is set to occupy on the site of AIB’s former Bankcentre headquarters in Ballsbridge, Dublin 4.

The delivery of Google’s new 36,850sq m (396,660sq ft) office complex at Boland’s Quay in Dublin 2 however will see it dwarf its tech peers in terms of its Dublin presence. Upon completion of the scheme, Google will occupy in excess of one million sq ft of office space on Barrow Street and in the area surrounding Grand Canal Quay.