Iput collected €27.9m in rent in the last quarter

Property fund distributed €25.2 million to shareholders in the period 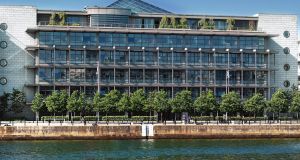 Property fund Iput collected €27.9 million in rental income and distributed €25.2 million to shareholders in the third quarter of this year.

The company, which has a 99.6 per cent occupancy, said rental values increased 0.2 per cent in the quarter, with office rents contributing the most to growth.

Those increased rentals allowed the fund increase its shareholder dividend by 50 cent to €11.50 per share.

Iput completed a €160 million transaction during the quarter, acquiring Deloitte House on Earlsfort Terrace in return for disposing of assets on Molesworth Street and Georges Dock.

Additionally, Iput signed new lettings in the period, bringing the value of new leases completed in 2018 to €13.4 million. It said BioMarin Pharmaceuticals pre-let space at Earlsfort Terrace at an annual rent of €1.5 million while reinsurance company Partner Re took a long-term lease in the company’s Exchange building in the IFSC.

At present, the fund is replacing Fitzwilton House with a 150,000sq ft office development.

Some 69 per cent of Iput’s assets comprise of office space while 19 per cent is accounted for in retail space and 10 per cent in logistics. The vast majority of its portfolio is located in Dublin.

Iput’s major holdings include No 1, Grand Canal Square; Riverside one and two on Sir John Rogerson’s Quay; and 10 Molesworth Street. Its retail tenants include Ikea, the White Company, Zara and Massimo Dutti while clients in its industrial holdings include DHL, Musgrave and BWG Foods.