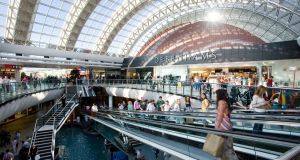 The Blanchardstown Centre is home to more than 180 stores and has an annual footfall of 16.5 million.

Hollister is set to become the latest retailer to join the line-up at the Blanchardstown Centre.

The American clothing brand has agreed a 10-year lease for a 582sq m (6,265sq ft) unit at the hugely-successful Dublin scheme. Agent BNP Paribas Real Estate brokered the deal on behalf of the centre's owners, Blackstone.

Hollister will join JD Sports who signed up last year for a 1,100sq m (11,800sq ft) store within a 55,000sq ft extension that is under construction. Distributed across two levels adjoining Blanchardstown’s central mall, the development will comprise eight new retail units upon completion next year.

Commenting on Hollister’s decision to locate at Blanchardstown, Pat Nash, managing director of Multi Ireland & UK, said: “This signing underlines the growth of our offering and our ability to provide the broadest retailing choice in both our retail parks and our covered malls.”

This space is being earmarked for the provision of a number of new restaurants ranging in size from 142sq m to 861sq m (1,528sq ft to 9,267sq ft). The extension will be located within close proximity to the Odeon cineplex and several of Blanchardstown’s existing eateries including Nando’s Milano and Eddie Rockets.

Developed originally by Stephen Vernon’s Green Property in 1996, the Blanchardstown Centre is acknowledged as one of Ireland’s foremost and most successful retail and leisure operations with more than 16.5 million visitors annually. The scheme includes more than 180 stores and is anchored by Dunnes Stores, Marks & Spencer, Penneys and Debenhams.