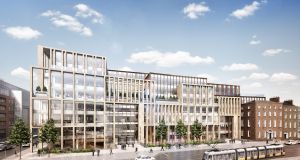 The development, about two minutes’ walk from St Stephen’s Green, is likely to cost in excess of €100 million, according to property sources.

Hibernia Reit, led by chief executive Kevin Nowlan, secured approval from Dublin City Council on Monday to press ahead with a revised scheme that allows for a 29,264sq m (315,000sq ft ) building on a 1.9-acre site.

This would be capable of accommodating about 3,000 workers and is almost 14 per cent larger than the plan that was approved in full more than two years’ ago.

The property group is expected to commence construction in January 2023, after about 500 Garda staff based on the premises move to a planned new €80 million Garda command and control centre on Military Road near Heuston Station is completed. Work on the new seven-storey Garda premises is set to begin early next year.

Hibernia Reit acquired the Harcourt Square complex in 2015 for €70 million from US investment firm Starwood Capital and subsequently sought to secure vacant possession of the four blocks as leases expired on them during 2016.

This triggered a legal dispute with the Office of Public Works (OPW), which manages the State’s property portfolio and requirements.

A settlement was reached in December 2016, resulting in the OPW securing a six-year lease extension on the premises, which also houses the national Garda Bureau of Fraud Investigation, the Special Detective Unit, and Emergency Response Unit.

The planned Harcourt Square development has been designed to give Hibernia Reit the flexibility of renting the entire space, stacked eight storeys over a basement, to one large tenant or to multiple users.

“It’s one of the jewels in our development pipeline and provides an extremely rare opportunity for a new building of over 300,000sq ft in Dublin’s historic core,” said Mark Pollard, director of development at Hibernia Reit. “The design flexibility within the scheme makes excellent use of space to suit a variety of future occupiers.”

The scheme also includes the refurbishment of adjacent buildings at 39 and 40 Harcourt Street. Number 39 is a Georgian townhouse built around 1800. The development is expected to be completed in 2025.

Hibernia Reit reported on November 13th that its portfolio value stood at €1.33 billion at the end of September, and that its total return for the first six months of its financial year came to 5.9 per cent, compared to 4.4 per cent for the Investment Property Databank (IPD) Ireland index.

The company, which floated on the stock market in December 2013, confirmed the same day that it had let one of its new developments, 1 Sir John Rogerson’s Quay, to software multinational group Hubspot, which makes sales and marketing software. The building is one of five that make up the group’s so-called Windmill Quarter development in Dublin’s south docklands.