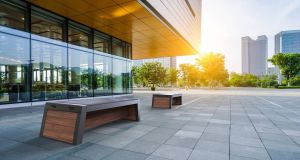 A Northern Ireland company which has developed a smart bench with a range of wifi, USB charging and data gathering features is to expand its operations to the United States and open its first office in Washington.

ESF (Environmental Street Furniture) designs and manufactures street and themed products for the both the public and private sectors and currently exports to 22 countries from its headquarters in Newtownabbey.

Its urban furniture products are in daily use at entertainment locations across the globe but after clinching a number of new “contracts in the themed entertainment industry in North America” – which it cannot elaborate on because of confidentiality clauses – ESF has decided to open a new base in the US.

Alan Lowry, the company’s managing director, said it had focused solely on the UK market when he first started the business five years ago, but since then ESF has expanded “from Malta to Miami and Azerbaijan to Astana providing street, themed and solar products across many industries”.

Mr Lowry said the decision to establish a US office was the next step for the growing business.

“We have experienced significant growth, our export sales increased to 30 per cent in 2016-2017. There is a lot of potential within the American market, especially for our themed and solar powered products and we felt this was the right time to build this market,” he said.

The innovative outdoor bench, which was designed and manufactured by ESF in the North, allows solar energy to be collected and stored to power mobile device charging and provide temperature-controlled ventilated seating.

Stocktake: Active fund managers fail to earn their keep 05:40
Working from home: New costs, new stresses and little relief 05:32
Stocktake: History says this is not a bear market rally 05:30
Joint accounts: if one of us dies, can the other access the money? 05:30
Covid-19 has turned the volume up on musicians’ cut from streaming 05:27

1 HSBC board rethinks overhaul and seeks even deeper cuts
2 Working from home: New costs, new stresses and little relief
3 Eason to lay off 150 staff as it prepares for June reopening
4 Lucinda Creighton’s consultancy agrees partnership with US lobbyist
5 ESB shelves plan for €500m electricity generator at Poolbeg
6 Will remote working mean an end for the corporate HQ?
7 Reopening economy does not cause coronavirus spike – researchers
8 Covid-19 has turned the volume up on musicians’ cut from streaming
9 Joint accounts: if one of us dies, can the other access the money?
10 ‘Over 1,000’ pubs have interest in Covid-19 insurance test case
Real news has value SUBSCRIBE