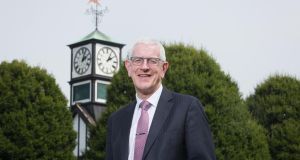 Michael Duffy’s office has one of the nicest views in Ireland, looking on to the lush main arena in the RDS in Ballsbridge. And he’ll have one of the best seats in the house when the annual Dublin Horse Show begins next Wednesday.

“I have a great office, especially during the horse show, rugby matches and things like that,” he says, as the sprinklers outside suddenly burst into life, drawing water from an onsite well.

A couple of groundsmen are preparing the turf for the arrival of the best international showjumpers and some of the world’s most expensive horse flesh for the 144th Dublin Horse Show.

According to Duffy, this year’s show is shaping up nicely. “Our online sales are 20 per cent ahead, like for like,” he says. “We’ve eight new sponsors, great quality ones like Qatar Airways, [hotel resort] Mount Juliet, Keelings and others. Corporate hospitality is long sold out and the trade stands are sold out. It’s still all to do but the indications for this year are positive.”

He cites a 6 per cent increase in horse entries as a “good benchmark” for the programme of events that has been put together for the five days of the show. Some 1,500 horses will compete this year.

The showjumping jamboree is the biggest event hosted each year by the Royal Dublin Society, with more than 100,000 people expected through the gates.

“The horse show is not a commercial venture, it’s a foundation activity [of the RDS]. We don’t run it on a for-profit basis.”

The primary aim of the show is to support and promote the Irish sport horse. On taking over at the RDS, Duffy recognised the need to broaden its appeal to non-horsey types, improve the equestrian programme, and invest in its jaded facilities.

“Over the years, we’ve made probably 40-plus changes to the equestrian programme, all the time changing the format and some of the judging.

Entry fees, trade stands and corporate hospitality accounts for about 45 per cent of income from the show, with the balance from sponsorship and ticket sales.

“Generally, if we can fund it on a break-even basis, we’re happy with that,” Duffy says.

Duffy moved to the RDS in 2004 after a decade as head of Bord Bia, the State agency responsible for promoting Irish food. Was he a showjumping fan?

“I would have grown up with the horse show on television and . . . had been to the show a number of times both as a visitor and for corporate hospitality. But I wouldn’t have been knowledgeable about the horse show.”

The RDS also hosts the Leinster rugby team, which has used it as a home venue for the past 10 years. And each summer it hosts a number of concerts, with Justin Bieber the headline act this year.

It is also well known for hosting a clatter of trade shows and exhibitions (the high-profile Young Scientist & Technology exhibition among them), various exams, and for elections or referendum counts. In all, it hosts more than 300 events each year. Pope Francis could be a VIP visitor next year for the six-day World Meeting of Families.

Duffy says such events are a necessary “funding mechanism for our foundation [or philanthropic] activities”, which run to about €2 million a year across the arts, agriculture, science and industry.

“When I came here we were putting about €800,000 into foundation,” he says. “We have to be successful commercially to fund these.”

The once sleepy RDS, which was founded in 1731, has certainly upped its game commercially in the past 15 years. The five-star Intercontinental Hotel (the old Four Seasons) pays a ground rent of €750,000 annually while 200,000sq ft of offices on the Simmonscourt site are fully let.

It has permission out to 2019 to build another office block, and has plans to redevelop the main arena at a cost of more than €30 million. This would increase the capacity to 21,000 and provide modern spectator and corporate hospitality facilities.

An application for funding has been made to the Government. Duffy hopes to get a decision by the end of this year, but the RDS will foot “well over half” of the bill. Construction would take a year to complete and could begin after the 2018 horse show.

The new stadium would be ready in time to play a part in the 2023 Rugby World Cup, should Ireland get the nod to host the tournament.

The RDS still owes €15 million to AIB on its existing office block, but the development is valued on the books at €84 million. “So that’s okay,” Duffy says.

He accepts that rebuilding the stadium while constructing an office block on an adjacent site would be tricky logistically.

“There’s an issue of doing both at the same time but my experience of the RDS is that it does its homework very thoroughly. We won’t take a risk that we feel will expose us financially.”

The RDS’s prime location in Ballsbridge can be both a blessing and a curse. Its proximity to the city centre makes it a hugely attractive venue for events but the site is landlocked in a bustling neighbourhood, and each year local residents become a little less forgiving about the disruption caused by hosting 1.6 million people a year.

There has been talk of the RDS cashing in its chips and moving to a greenfield site outside Dublin where it would have more space for the horse show. If RTÉ can secure €107 million from selling nine acres at its Montrose campus in Donnybrook, what would the RDS earn from selling its 42 acres?

Duffy is adamant that the RDS is going nowhere. “One of the things that makes this a great horse show is its location,” he says. “It’s like an oasis in the city. The overseas equestrian visitors just love it . . . the location, the tradition, the history, the quality of the show.

“My own personal view is that part and parcel of the fundamental character of the show is its location in the Ballsbridge showgrounds, and you would lose that by moving.”

Besides, where would Irish tech event specialist Paddy Cosgrave host his new MoneyConf expo or other future events?

The RDS used to host Cosgrave’s much-hyped Web Summit, until he moved it to Lisbon this year, having complained about the quality of the wifi, the price of hotel rooms and a lack of support from Government.

In January 2016, Cosgrave had this to say about his decision to move the Web Summit from Dublin to Lisbon. “The venue [RDS] that we used in Dublin was very, very small. It wasn’t built for conferences, it was built for horse shows.”

“They are an ambitious growing company and we played a really important part in the early days of the Web Summit and we will be happy to play a similar role in developing MoneyConf,” Duffy says diplomatically, and with a little knowing smile.

“Paddy has gone on record as saying he has a very good relationship with the RDS management. I’m glad to hear that.”

However, Duffy does admit to a little frustration at how the RDS was portrayed when wifi issues emerged at the Web Summit.

“The wifi issues were technology issues, not venue issues,” he says. “The reality is if you put that density of wifi into a location you have technical limitations. We’ve always said that. And there were wifi issues in Lisbon.

“The wifi never went down, contrary to assertions. We know the performance of the wifi was very impressive. So it was frustrating.”

Duffy was raised in Dún Laoghaire, one of five children in the family. His father was an accountant but young Duffy was drawn to physics. He studied in UCD and recalls the dean warning his class that there probably wouldn’t be jobs for them in Ireland on graduating.

At the time, Duffy was working in a snooker hall in Dún Laoghaire to earn some money, and this helped him impress a recruiter for a then UK textiles plc called Courtaulds.

“I was their first Irish graduate,” he recalls. “He was fascinated by the fact that I ran a snooker hall. It was just a job but I got pretty good at it, too.”

Courtaulds sent Duffy to Coventry, though not literally. The company later opened a plant in Letterkenny, the “biggest investment in the State at the time”, which saw Duffy returning home.

As Courtaulds was commissioning the plant, the bottom fell out of the market, and Duffy joined IDA Ireland in 1981, in its rescue and restructuring section.

“The country was going through a really dreadful time, interest rates were sky high and I spent three years looking at P&Ls [profit and loss accounts], cash flows and balance sheets, working with companies that were in severe financial difficulties.

“It was great experience. And I got to learn about people, who can be eternal optimists. I got to understand human nature much better.”

He moved around inside the IDA before being promoted to run the food area – aided, he reckons, by going prematurely grey at 32. “They probably thought I was older than I was.”

In 1994, he was selected as chief executive of Bord Bia, a new State agency.

“We were starting an organisation from scratch, which was fantastic. It gives you the opportunity to put in place the cultural processes that you believe in.”

The chairmen during his decade there were ex-Glanbia chief Ned Sullivan (“a brilliant marketing guy”) and former IAWS/One51 boss Philip Lynch (“huge knowledge of food industry”).

Duffy’s time at Bord Bia coincided with two BSE scandals, and a foot and mouth crisis. “They were challenging.”

In 2004, it was “time to change” and Ballsbridge beckoned.

“The RDS was planning a €100 million investment programme and I was fortunate with my timing,” he says.

Duffy never intended staying so long but “there are certain things I’d like to see through”.

The challenge now is to deliver on the new infrastructure developments, while keeping the day-to-day commercial operations ticking over, and supporting its foundation activities.

“That’s what makes the job so interesting,” he says.

He’d also like to boost the RDS’s membership from its current level of about 3,500, and to make it more attractive to younger people – the current average age is 60-plus – and the business community.

“We’d like to see that grow because they’re the lifeblood of the place.”

For now, his focus is squarely on the horse show. “It’s going to be a busy week but it’s great to be involved in one of the world’s great horse shows. Hopefully everyone will enjoy themselves.”

Something you might expect: He is a member of the RDS and a Leinster rugby supporter.

Something that might surprise: He has an honorary doctorate from St Joseph’s University in Philadelphia in food marketing from his time with Bord Bia.