Early-house pub and apartments in Dublin 7 for sale for €1.7m 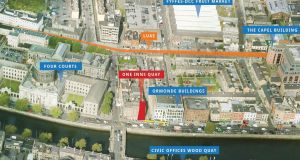 The Chancery Inn at 1 Inns Quay close to the Four Courts in Dublin 7 is for sale at €1.7 million through agent Robert Colleran.

Located in the heart of the capital’s legal quarter, the early-house pub – open Monday to Friday from 9am and on Saturdays from 7am – is in a pre-1963 four-storey over basement building dating from the 1820s.

Over the pub are five short-term rental apartments which are self-contained with a separate entrance from Charles Street West. These have been fitted out to a reasonably high standard for the Airbnb market.

The Chancery Inn has been trading as an early house for many years – originally to accommodate dockers along the quays – but these days attracts revellers from Temple Bar and beyond.

Robert Colleran says the property generates steady short-term rental income from the pub and apartments, and “can be sold with full vacant possession”.

The building, which overlooks the Liffey, is close to the Luas, bus routes and is within walking distance of the city centre.

1 Basic income for all: Has the Covid crisis given us a new economic model?
2 Brexit stumbling blocks persist as Barnier travels to London
3 ‘I don’t need to do any of this. . .I don’t actually need to work.’
4 Only way is up for Stripe as valuation skyrockets
5 Online shoppers face unwelcome tax surprise
6 Direct sea routes to Europe offer certainty in choppy Brexit waters
7 Kinzen raises $2.2m as it helps clients fight ‘misinformation’
8 AIB revives €1bn-plus problem mortgages sale
9 ‘Make plans but don’t hold on to them too seriously’
10 Promontoria barred from pursuing doctor over Ulster Bank loan
Real news has value SUBSCRIBE