UK retailer’s 35,000sq ft outlet will require adjoining Next to move out early 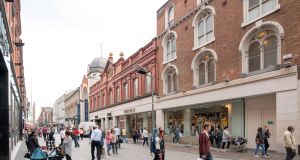 Jervis Shopping Centre on Dublin’s Henry Street. One of its tenants, Next, plans to relocate to a part of the former Arnotts store at 7-9 Henry Street

UK sports and fashion retailer JD Sports is limbering up for a future growth in sales as it prepares to take over a flagship store at the Jervis Shopping Centre in Henry Street, Dublin 1.

The company will relocate later this year to 3,251sq m (35,000sq ft) on the ground and upper ground, most of it previously occupied by ladies fashion retailer Forever 21 until it closed down at the end of March.

JD will pay an annual rent of €2.15 million for its extensive outlet, which will also incorporate the adjoining 427sq m (4,600sq ft) currently occupied by Next. That trader is to be compensated for surrendering its lease almost 12 years before it is due to run out.

Next plans to relocate this summer to a part of the former Arnotts store at 7-9 Henry Street, which will have a floor area of 3,716sq m (40,000sq ft) over three levels.

Since moving into the Henry Street centre in the early 2000s and taking over Champion Sports, JD Sports has opened a string of new shops in other cities and towns and is now seen as a pillar brand.

Darragh Cronin of letting agent Savills said the new letting to JD Sports would not only improve the consumer offer but add greatly to the overall strength of the retail line-up and confirm the resilience of the Irish retail market. He said he expected to be in a position to announce further lettings in the coming months.