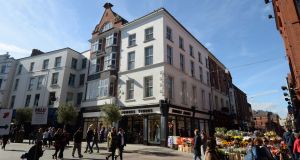 Dunnes Stores has declined to comment on reports that it is planning to move out of its former flagship store on Dublin’s Grafton Street with the intention of leasing the building to another trader.

Several leading international fashion companies have made it known that they are interested in leasing the store, which is ideally located near the top of Grafton Street. In the past Dunnes has apparently rebuffed offers for the premises, which it has owned for 24 years.

The same choice of fashion is already in heavy demand close by in St Stephen’s Green Shopping Centre, where Dunnes is the dominant player with three substantial trading floors, including a food hall and another level for household goods.

Overseas fashion traders planning to look over the Grafton Street store are expected to include the high-profile Inditex Group, which has several strings to its bow including Zara, Pull & Bear, Massimo Dutti and Bershka.

Dunnes opened in Grafton Street in 1994, when it took over the Cassidy’s group of shops in the city.

Any trader chosen to replace Dunnes is likely to face a rent of at least €750,000 to €850,000, depending on which side finances the refurbishment of the four-storey over-basement block. A short distance away, the London-based White Company recently agreed a rent of €750,000 for three open-plan retail floor plates extending to 800sq m (8,527sq ft) in a newly upgraded but less prominent shop at 72 Grafton Street.

The renewed interest in Dunnes comes as the area behind the store on Chatham Street is being redeveloped to accommodate five new large-scale shops alongside Neary’s Bar with overhead offices and apartments. The high-profile project forms part of a larger redevelopment stretching over on to South King Street and is being funded by international investor Hines.

Asked on Monday evening if Dunnes planned to leave its Grafton Street store, a spokesman said he had “no comment” to make.