Bidding in excess of €1.6m expected on Dublin car park 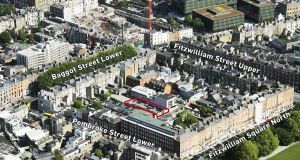 A surface car park with 32 spaces, located between Baggot Street and Fitzwilliam Square in Dublin’s south inner city, is expected to attract considerable interest from locally based professional companies as well as investors and developers when it goes on sale.

Estate agent Lisney, which is handling the sale of Pembroke Lane car park, has owned the facility for more than three decades but has not used it in recent years after relocating its head office to St Stephen’s Green House, opposite the National Concert Hall.

Lisney’s managing director, Duncan Lyster, said he expects bidding in excess of €1.6 million, which would show a net initial yield of 6 per cent based on current rental income and allowing for purchasing costs of 8.46 per cent. The sale is to be handled by way of online tendering utilising Lisney’s “Clock to Purchase” platform.

The car park extends to 0.06 of a hectare (0.14 of an acre) – roughly the same width as two Georgian houses – and produces a gross income of €112,000 annually through short-term licence arrangements.

Most of the site has a Zone Z1 rating for sustainable residential neighbourhoods “to protect, provide and improve residential amenities”, with a small portion close to the Baggot Street end of the site falling within Z8 zoning of “Georgian Conservation Areas”.

Duncan Lyster said Lisney plans to use the capital released from the sale for further expansion and development of its business during 2019.

Lisney has purchased several of its branch offices over the past few years, including those in Upper Leeson Street, Dundrum, Howth and Terenure. The company has eight offices in all in Dublin, Belfast, Cork and London, with another unidentified branch due to open in the coming months.