Dublin Port plans to ‘reorder area’ to open up to city 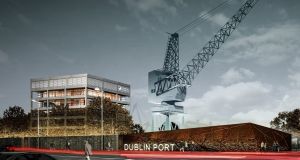 A new boundary made from pre-rusted Corten steel panels will replace the late 19th-century stone wall at southern end of the two-acre site, with a relocated 10-tonne Stothert & Pitt 1950s crane rearing up above the new wall

Dublin Port, for long a nearly enclosed semi-industrial estate at the eastern end of Docklands, is planning to open up to the city with an imaginative scheme to reorder the entire area around its own headquarters off East Wall Road.

Project manager Jim Kelleher, who was responsible for the outstanding Diving Bell restoration on Sir John Rogerson’s Quay, says the aim is to “soften the hard edge” between Port Centre and the still-developing north Docklands area.

Port Centre, designed by Scott Tallon Walker and completed in 1981, has been marooned behind a stone wall that extends all along the east side of the heavily trafficked East Wall Road, which is extremely hostile to pedestrians.

Standing six storeys high on a podium, the new building replaced the port’s old headquarters at the Ballast Office, on the corner of Aston Quay and Westmoreland Street, which in turn was demolished and replaced by a half-hearted “replica”.

An architectural competition in 2014 led to Darmody Architects winning the commission to create a significant public space around Port Centre, including removal of parts of the unlisted stone boundary wall dating from the 1880s.

Principal architect Tim Darmody says his scheme is “all about port-city integration”, with an impressive set of gates on East Wall Road leading to a plaza in front of the port company’s headquarters and a landscaped “garden” to the south of it.

A new boundary made from pre-rusted Corten steel panels will replace the late 19th-century stone wall at southern end of the two-acre site, with a relocated 10-tonne Stothert & Pitt crane, dating from the 1950s, rearing up above the new wall.

This dramatic installation will be “painted, illuminated, celebrated”, as Jim Kelleher says, as a totem for Dublin Port and its history, clearly visible to motorists driving north across the East Link Bridge towards the Port Tunnel and M50 motorway.

Separately, Dublin City Council is planning to remove the roundabout on the north side of the bridge, replacing it with a set of traffic lights, and “reorder” East Wall Road to make it less intimidating and more attractive to pedestrians and cyclists.

The €5.3 million scheme to open up Dublin Port to the city, scheduled for completion next autumn, will tie in with plans to relocate visiting cruise liners from the nether end of its vast estate to a pair of new berths just east of the bridge.

Dublin Port Company is also planning a 3km “great green line” – in the words of its dynamic chief executive, Eamon O’Reilly – along the northern fringe of the port, providing a new recreational route for cyclists and pedestrians to discover. It would, in effect, form an extension to the “S2S” (Sutton to Sandycove) cycle route, which is taking years to implement. The port company also has plans for a pedestrian and cycle overbridge at Promenade Road, leading into the port area.

All of these improvements derive from the 2012 masterplan for the development of the port, which includes major works at Alexandra Basin, but does not include the contentious plan to infill 21 hectares of the inner bay for more port activities.