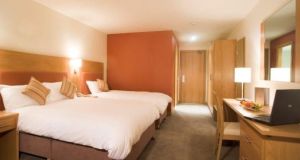 Dalata will seek planning for an additional 150 rooms at the Clayton near Dublin Airport.

Listed Irish hotel group Dalata, which operates the Clayton and Maldron brands, will consider paying a first dividend to shareholders in 2017.

Speaking after its annual general meeting in Dublin yesterday, Dalata’s chairman John Hennessy told The Irish Times said the issue would be addressed once it had invested the remaining €100 million in funds at its disposal for expansion.

“We expect to be fully invested, for the most part, in 2016 and we will be looking actively at the possibility of paying a dividend out of 2017 profits,” Mr Hennessy said. “But we haven’t made a decision on that.”

Dalata chief executive, Pat McCann said Dalata would complete its acquisition activity in Ireland by the end of this year but was not interested in purchasing either the Gresham or the former Burlington hotels in Dublin or Lyrath in Kilkenny, all of which are for sale.

He said “value wise” these deals didn’t stack up for Dalata, Ireland’s biggest hotel chain with a portfolio of 42 properties with more than 7,700 rooms. “We are very disciplined buyers and we’re not going to break that,” he said.

Dalata is also looking to extend some existing properties. It has scrapped previous plans to add 356 rooms and a conference centre to the former Bewleys (now Clayton) property near Dublin Airport.

Instead, it will seek planning for an additional 150 rooms. “That [356 ROOMS]would bring the property to over 800 rooms and would probably be a bridge too far,” he said.

Mr McCann said Dalata was unlikely to begin expanding its presence in the UK before 2018/19.

In light of recent controversies about the use of offshore entities by major corporations to shelter themselves against corporation tax, shareholder David McCabe asked about the purpose of its Netherlands-based subsidiary Cenan BV.

Mr Hennessy said it designed was to provide a “flexible financing structure” for its UK business. He said the company seeks to organise its tax affairs “within the law and the spirit of the law” and “was not in any way aggressive” about tax planning.

Mr McCabe also questioned why bonuses to executives were being paid in cash rather than long-dated share options.

Margaret Sweeney, chair of Dalata’s remuneration committee, said 20 per cent of bonuses are now paid in shares and deferred for three years, along with a long term incentive plan (LTIP) over three years in the form of shares.

Some 11.2 per cent of proxies voted against the resolution on the remuneration report. It is understood that one of the company’s large shareholders opposed the proposal as a result of the company’s LTIP being structured over three years rather than five.

Dalata’s annual report shows that Mr McCann’s salary rose by 13 per cent from January to €475,000. Fellow executives Stephen McNally and Dermot Crowley received increases of 10 per cent each.

Meanwhile, staff have been given a 2 to 3 per cent pay rise for 2016. Mr McCann said it was the company’s intention to introduce a share save scheme for staff in September.

1 Three Ireland switches on 5G network around the country
2 Doing the business
3 State’s tourism taskforce wants changes to school holidays to boost ‘staycations’
4 Coronavirus shows how interconnected the world economy has become
5 Am I paying too much for my buy-to-let mortgage?
6 Should I switch bank now with Ulster Bank at risk of closing?
7 Pilita Clark: The looming legal minefield of working from home
8 Belfast mailbox address used by account holder in Russian money-laundering scheme
9 Estée Lauder staff at Dublin airport plan further strike action
10 Will Facebook walk away from European market after data protection 'hissy fit'?
Real news has value SUBSCRIBE