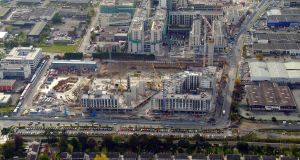 The State’s largest private landlord has been knocked back in a planning application for a major 492-apartment development in Dublin’s Sandyford.

Property firm Ires Reit was asked to resubmit proposals for its “Rockbrook” site after planners with Dún Laoghaire-Rathdown County Council (DLRCC) highlighted height and density concerns with the initial scheme.

The setback comes amid controversy over the company’s Beacon South Quarter apartment complex, the latest boom-time construction project to be identified as having substandard fire safety provisions.

Ires Reit had submitted an application for three 14-storey apartment blocks and several commercial units at its Rockbrook site close to the city’s M50 motorway.

The firm had bought the site as part of a parcel of lands from Nama for €87.5 million in 2015, believing planners would be amenable to increased density developments given current demand for housing in the capital.

However, the council objected to the height of the scheme, the distance between the blocks and their relationship to surrounding developments.

In its ruling, it suggested the uniform height of the proposed apartment blocks made the development appear “overbearing and monolithic”.

The company has resubmitted a scaled-back plan for 456 apartments with two stories removed from one of the apartment blocks.

The loss of 36 units will reduce the potential rental income from the scheme by some €600,000 a year.

The site had previously had planning for 467 apartments, dating back to 2006.

Minister for Housing Simon Coveney has been critical of the restrictions applied to the height of apartment blocks in Dublin due to the risks to future housing supply.

Dublin City Council chief executive Owen Keegan had wanted to set 28 metres as the maximum height for low-rise apartments in the city centre, which is the height currently permitted for office blocks.

“The Irish planning system continues to generally disapprove of building higher, even in urban locations, despite the dramatic shortage of build-to-rent apartments in Dublin,” Goodbody analyst Colm Lauder said.

“The inconsistent planning rulings have put further pressure on the residential supply pipeline, exacerbating the apartment shortage in Dublin.”

Ires Reit, Ireland’s largest residential landlord, with a portfolio of some 2,377 apartments, has benefited significantly from rising rents.

In a recent interview with The Irish Times, chief executive David Ehrlich said the company, an offshoot of Canadian investment group Capreit, had never seen rental increases like this in any other jurisdiction.

Rents in Dublin are now nearly 10 per cent higher than in their previous peak back in 2008.

As part owner of the Beacon South Quarter apartment complex in Sandyford, Ires Reit has been dragged into the controversy over the structural defects identified at the complex, which was built in 2005.

Apartment owners are facing a bill of more than €10 million to fix the problems.