Commerical property shows value increase but off low base 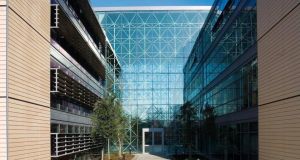 Commercial property consultants CBRE are gearing up for another buoyant real estate market in the year ahead with large volumes of transactions expected in both asset and loan sales.

Most investment opportunities will stem from the continuing de-leveraging by Nama and various financial institutions but the expectation is that there will also be an increased level of sales of properties acquired by the various funds in recent years.

Enda Luddy, managing director of CBRE Ireland, speaking at the launch yesterday of the company’s annual outlook report for 2015, said Irish property was one of the best performing asset classes in the world in the last 12 months when transaction volumes were up significantly in almost all sectors.

However, it was important to remember that recent value increases were coming off a low base following an exceptionally severe crash and values still remained considerably below peak levels-something that would continue to attract investors over the coming year.

He said the macroeconomic backdrop was the biggest threat to the real estate sector this year.

CBRE forecast that prime yields in the Dublin market had the potential to contract by at least another 50 basis points this year.

Sourcing value would become trickier as the market moved from being an opportunistic play to a core-value exercise. This could lead to some investors starting to look elsewhere.

The report predicted that this year would bring about a recovery outside Dublin with an improvement in rental and capital values expected in suburban and provincial locations.

There is also to be a renewed focus on new developments, particularly in the Dublin office, housing and hotel markets.

The scarcity of modern office space in Dublin city centre would lead to sustained upward pressure on rental values with prime rents having the potential to reach €592 per sq m (€55 per sq ft) by the end of 2015-reflecting a year on year increase of 22 per cent.

Marie Hunt, head of research at CBRE, said that with euro zone interest rates expected to remain low for the foreseeable future the relative yield arbitrage offered by real estate investment would remain even if, as anticipated, prime yields contracted further over the course of the year.

The CBRE report showed that there were 243 investment deals greater than €1 million during 2014 totalling €4.58 billion compared to 96 transactions with a turnover of €1.78 billion in 2013.

The overall figure reached more than €21 billion when loan sales and investment assets are taken into account .

One of the highlights was the sale of 63 hotels with an overall valuation of just over €341 million compared to 33 hotels in 2013 for €160 million.

Additionally, 17 further sales with a valuation of €355 million were at the legal stage by year end.

Equally interesting was the sale of 38 Dublin bars in 2014 which netted €44 million. An additional 19 pubs were in legals at the end of the year. In 2013 only 20 Dublin bars were sold at an overall valuation of €15 million.

The overall vacancy rate in the city dropped during the sale period from 15.33 per cent to 11.84 per cent.

1 Former junior minister Michael D’Arcy did not contact ethics watchdog over new job
2 Three Ireland switches on 5G network around the country
3 Mortgage breaks will not be extended beyond this week
4 Pilita Clark: The looming legal minefield of working from home
5 State should use Covid-19 impact on building costs to build homes
6 Dublin-based ID-Pal raises €1m in funding as it looks to expand
7 Chris Johns: Boohoo exposed on pay and conditions in digital economy
8 Am I paying too much for my buy to let mortgage?
9 New car prices could rise by up to €10,000 if taxes increase in budget
10 More financial firms setting up or expanding in Ireland despite Covid-19
Real news has value SUBSCRIBE