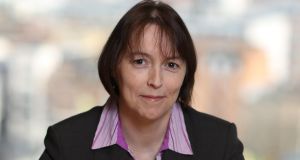 Borrowers with higher debt burdens than the current Central Bank of Ireland’s rules allow are more likely to have sought payment breaks during the current crisis, the Central Bank’s deputy governor Sharon Donnery has said.

This was proof that the regulator’s mortgage lending rules had helped the financial sector “absorb rather than amplify the shock of the pandemic”, she said.

Banks are, however, allowed to apply exemptions in some cases, and many borrowers will have secured loans prior to these rules being enforced.

Ms Donnery said there was clear evidence that higher debt burdens have been associated with greater take-up of payment breaks.

“For example, those borrowers with an LTI of 4 were twice as likely to opt for a payment break as those with an LTI between 2 and 2.5, reflecting the link between borrowing levels and repayment difficulties,” she said.

Counterfactual analysis also shows that “house price levels could have been approximately 25 per cent higher in the year prior to the pandemic had the mortgage measures not been in place”, she said.

Ms Donnery was speaking as the Central Bank published a financial stability note, suggesting the arrival of institutional property investors here in the wake of the financial crash had brought risks as well as benefits.

It also noted that the Central Bank was actively exploring new policy interventions to regulate the commercial property investment market.

The research stems from a survey of property funds . The funds looked at are known as “alternative investment funds”. There were 171 of them holding €23.3 billion in property assets in the final quarter of 2019, according to the Central Bank survey.

The total value of investment in Commercial Real Estate (CRE) here was calculated at €53 billion, which means Irish property funds are estimated to hold more than 40 per cent of the market.

“The growth of Irish property funds since the global financial crisis has brought with it many benefits, including the diversification of financing channels for CRE away from domestic investors towards international investors and a reduced reliance on debt financing intermediated by Irish retail banks,” Ms Donnery said.

3 Eirgrid proposals to include €2bn power line around Irish coast