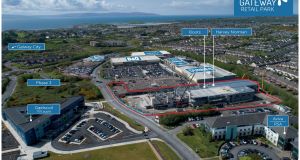 An aerial view of the Gateway Retail Park in Galway. Boots’ new premises is under construction as part of the second phase of the scheme.

Boots has become the latest major retailer to sign up at the landmark Gateway Retail Park in Galway.

The pharmacy-led health and beauty retailer has agreed to take a new 7,000sq m (75,347sq ft) premises at the scheme.

Boots are understood to be paying a rent in excess of €35 per sq ft per annum for its new store which is under construction as part of the second phase of the retail park. Boots will be located immediately adjacent to the new branch of Harvey Norman.

Due for delivery in the first quarter of 2020, the second phase at Gateway will comprise an additional 11,148sq m (120,000sq ft) of retail space offering eight new retailers, three new food and beverage operators and a gym. Current tenants at the Gateway park include Dunnes Stores, Next, New Look, McSharry Pharmacy and B&Q.

Gateway’s asset manager, Paddy O’Connor of Sigma Retail Partners, believes Boots’ decision to locate at the scheme further underpins it as the destination of choice for retailers in Galway.

Darren Peavoy from agents Bannon who handled the letting on behalf of the landlord said the remaining units at the scheme are all under offer.

Stephen Murray from JLL acted on behalf of Boots.