Marlin Hotel to open in Dublin 2 in July 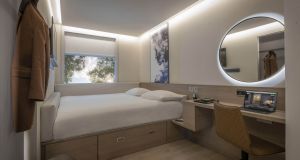 The €55 million Marlin Hotel will open in Dublin 2 this July, creating 110 new jobs and offering 300 bedrooms.

The company, led by Irishman John Corless, has seven facilities including aparthotels and a hotel at Waterloo in London. It opened its first development in 2003 and now has more than 600 serviced apartments and 230 bedrooms.

The Marlin Hotel in Dublin includes a co-working area, an indoor garden, a meeting space, a coffee dock and a 24-hour gym. It will also serve food and drinks.

Commenting on the hotel opening, general manager Michelle O’Donoghue said: “It truly is the first of its kind in Ireland a real hybrid offering. We are excited that Dublin is going to be home to something truly unique.”

The hotel, at which rates start from €199, was designed by architects Cantrell Crowley and built by McAleer and Rushe.