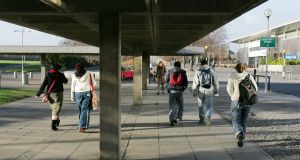 Demand from students for accommodation is strong. Photograph: Frank Miller

Lender and developer Bain Capital Ireland has sold a property for €47 million to Invesco Real Estate just months after buying it for €8 million.

Bain and its partner, Carrowmore Investments, led by Pat Cox, son of the former politician of the same name, paid about €8 million late last year for a site on Brickfield Lane in Dublin 8 with planning for 270 student apartments.

It emerged yesterday that US-based Invesco Real Estate has agreed to pay €47 million for the student accommodation when it is finished next summer, in time for the 2019/20 academic year.

The deal is thought to be the first “forward funded” transaction of its type completed in the Republic. Under its terms, Invesco will fund part of the building cost and then separately pay €47 million for the completed structure.

The building costs are not known, but on the basis of similar projects in Dublin, the figure should be about €30 million. Collen Construction, the main contractor, recently began building the block.

Led by chief executive David Cullen, a former banker, Bain focuses mostly on lending to projects. It has invested about €650 million across a series of developments in the Republic.

Last year, it paid a reported €90 million for three sites in Dublin, at Hollystown, Portmarnock and Rathfarnham. The company is backed by Boston-based Bain Capital, a private equity fund that manages more than $75 billion (€67 billion) on behalf of its investors.

Bain Capital Ireland started out as Broadhaven, a joint venture in which businessman Dermot Desmond was one of the original investors. He has since exited, and the US fund is now the company’s sole backer.

Carrowmore Investments focuses on property in the Republic and UK. It joined forces with Dubai-based Global Student Accommodation to build a 500-bed development on Gardiner Street in Dublin.

Demand for student accommodation in the Republic is strong. Recently, the Union of Students of Ireland argued that many of the purpose-built apartments coming on the market were too expensive for most of those attending third level. Student apartments are letting for between €1,000 and €1,400 a month.

Official figures show that almost 3,000 student apartments have been built since last year, when such developments qualified for the fast-track planning system under the strategic housing initiative.