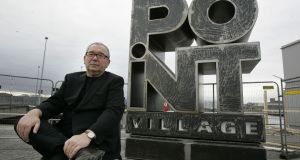 Point Village Development and businessman Harry Crosbie (above) agreed with Dunnes it would develop a shopping centre.

Dunnes Stores has breached an agreement by taking “no steps whatsoever” to start the fit out of its proposed Point Village store in Dublin, the Commercial Court has heard.

Point Village Development (PVD) is seeking orders requiring Dunnes to specifically perform its obligations under a 2008 development agreement and subsequent settlement agreements over the matter in 2010.

In the original 2008 agreement, PVD and businessman Harry Crosbie agreed with Dunnes that it would develop a shopping centre at the Point, to include 35 retail units together with a substantial anchor unit which Dunnes would fit out and operate.

Receivers Paul McCann and Stephen Tennant were appointed in 2013 over the assets of PVD and certain assets of Mr Crosbie, including their interests in the Point Village.

PVD, acting through the receivers, says that once certain matters, including that binding leases or agreements for leases, had been exchanged in relation to at least seven other ground-floor retail units in the development, Dunnes was required to begin the fit-out.

Dunnes was also required to pay €15 million to PVD, the court heard.

However, Mr McCann says in a sworn statement that this did not happen and Dunnes also failed to release the €15 million.

Dunnes has appealed a High Court decision requiring it to pay the money and that is due for hearing next May.

Mr McCann said the opening of the anchor unit is important to the operation and success of the Point Village. The longer the delay, the greater the prospect of further delays in prospective tenants of the smaller units being prepared to open, he says.

A successful shopping centre with an anchor tenant is situ is an important part of the creation of a thriving hub in the area, he said.

On Monday, Mr Justice Robert Haughton admitted the case to the fast-track Commercial Court and adjourned it to October.