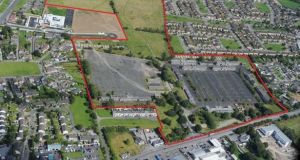 The former Magee Barracks in Kildare town, which closed in 1998

Jersey-based property developer David Kennedy, who was behind the massive Clancy Quay development in Islandbridge, Dublin, has been refused planning permission for a similar development in Kildare town.

Ballymount Properties, a company that lists Mr Kennedy as a director, submitted a planning application to An Bord Pleanála in early April to construct 200 houses and 64 apartments, a number of retail units, and a creche at the former Magee Barracks on Hospital Street. The proposal also called for the demolition of 16 buildings on the site.

An Bord Pleanála rejected the proposed development – which was submitted under the Government’ fast-track strategic housing development process – on the grounds that the plan contained too many three- and four-bedroom homes.

The barracks, which has been empty since it was closed by the Department of Defence in 1998, made more than four times its €2 million guide price when it was acquired in early 2017.

The Kildare military facility was originally built in 1900 on the site of the former Lock Hospital. A new barracks was built on the same site in 1938.

Mr Kennedy was involved in Clancy Quay Properties Ltd (CQP), which paid €25 million for the 13.5 acre site of the 19th-century Clancy Barracks site near Kilmainham in Dublin in 2007. Kennedy Wilson acquired the since renamed development for €80 million in 2013.

The developer is also behind the London-listed property company Formation Group, which lists former minister for defence Willie O’Dea as its chairman. The group has reported annual revenues of £37 million.

Separately, Cairn Homes has secured permission under the fast-track process for a new housing scheme in Maynooth, Co Kildare.

The housebuilder submitted a proposal to to build 320 houses, 142 apartments and and a 106-unit development offering 483 student bed spaces, for a site within the townland of Mariavilla in Maynooth in March.

Cairn is planning a mix of three- and four-bedroom houses and one-, two- and three- bedroom apartments. Additionally, the gate lodge to the site will be refurbished into a two-bedroom property.

On the student accommodation front, Cairn is planning to build 106 units that will accommodate 483 beds.

Cairn’s plans come after pharma group Shire said it would be employing 400 people at a site in the nearby town of Dunboyne where it is setting up a new biologics manufacturing plant.

Amenities being planned for the site include a creche with an outdoor play area, a cafe, a gym and a retail unit.