Aldi to pay €16.50 per sq ft for offices at Millennium Park in Naas

The Kildare campus is a 15-minute drive from the M50 motorway, providing easy access to Dublin suburbs and Dublin airport 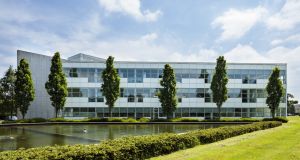 The German-headquartered supermarket giant Aldi will occupy Birch House on a 10-year lease, and at a headline rent of €16.50 per sq ft

The revival in the fortunes of the Millennium Park scheme in Naas, Co Kildare, continues apace. Having seen its overall value fall dramatically following the financial crash, the Kildare office campus has over recent years cemented its status as a location of choice for a host of blue chip organisations, including the Kerry Group, State Street Bank, AIB, GEA, the HSE, Volvo and the OPW.

These will now be joined by Aldi following its agreement to rent Birch House in its entirety. The German-headquartered supermarket giant will occupy its new offices on a 10-year lease, and at a headline rent of €16.50 per sq ft.

The deal also includes an agreement to rent all 156 of the building’s car parking spaces for an annual payment of €200 per space.

The Millennium Park campus is well located just a 15-minute drive from the M50 motorway, providing ease of access to both the north and south Dublin suburbs and Dublin airport. The new M7/N7 interchange 9A offers direct motorway access from the park to Galway, Cork, Limerick and Belfast.

Following the conclusion of the deal, Mr Smyth said CBRE and its joint agents QRE would now focus their efforts in relation to Millennium Park on other large occupiers seeking office accommodation where this could be provided with the existing planning permission in place for a detached building extending to 60,000sq ft.

Mr Smyth added that there were also options for office headquarter premises in excess of 100,000sq ft available at Millennium Park. While these larger properties were subject to planning, they could be delivered on a build-to-suit basis.