A permanent high profile on a busy corner of Blackrock for €7.5m

Strong rents are guaranteed for another eight years in this well-located office block, currently leased to Permanent TSB 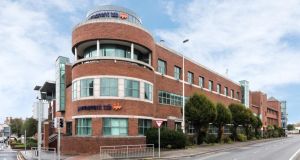 Paul Callanan of Savills is seeking in excess of €7.5 million for the Permanent TSB office which has a high profile on to the Blackrock bypass at Carysfort Court.

The three-storey over basement block provides high quality, open plan accommodation extending to 2,741 sq m (29,515 sq ft). There are 51 car parking spaces at basement level. The building stands on a site extending to 0.48 of an acre and is particularly bright internally because of its dual aspect on to Carysfort Avenue and the N31 Blackrock bypass. Whoever buys the building can bank on a good initial return on their investment and possibly renegotiate the lease terms with a view to extending the rental period with Permanent TSB.

The €7.5 million being sought for the property will show a net initial yield of 6.9 per cent and a valuation of €2,734 per sq m (€254 per sq ft). “At that price the investment will look very attractive to savvy investors who are anticipating further market growth in the Dublin office sector over the coming years,” said Callanan.