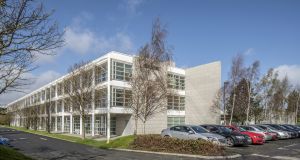 Building leased to Eir at Citywest Business Campus, Dublin. Eircom Ltd is the largest telecommunications operator in the Republic.

Trading activity in the commercial property market has moved up a notch with the planned sale of the Eir Network Management Centre at Citywest Business Campus in west Dublin.

Johnny Horgan and Sandra Walsh of CBRE are seeking offers in excess of €38 million for the distinctive three-storey modern office building with single-storey laboratories. The complex last changed hands in 2015, when it was bought for €30 million by the three-man Irish-UK investment group Sw3 Capital.

The same consortium is also looking for buyers for two other Dublin investment properties: a 10-year-old office block known as J5 Plaza at the North Park in Dublin 11, priced at €11.25 million; and the Dublin Business School on Aungier Street, with an asking price of more than €15 million.

The landmark building at Citywest extends to 7,199sq m (77,490sq ft) on an elevated site overlooking the N7 motorway to Naas. The grounds have a bigger than usual surface car park, with 260 spaces.

Citywest Business Campus has established itself as a premier suburban business location with a great variety of amenities, including restaurants, coffee shops, service stations and childcare facilities.

The building for sale is occupied by Eircom Ltd on a 25-year FRI lease from September 2010, with no break options and an unusually long term to run of 17 years. The asset produces an annual rent of €2,225,114 and is subject to fixed uplifts upon review in 2025 and 2030.

Throughout the agreed term the rent will increase by 32 per cent, generating a guaranteed uplift in income of €720,000 a year over the remainder of the lease.

The sale offers investors an opportunity to acquire 17 years of secure fixed income. A capital value of €490 per sq ft would be reflected if the quoted terms are accepted.

Horgan calls the sale of the Eir building an “outstanding investment opportunity to acquire a secure long income profile”.

Eircom Ltd is the largest telecommunications operator in the Republic. Last April, a 64.5 per cent majority stake was sold to a private investment firm owned by the French businessman Xavier Niel.