Marlet Group seeking okay for higher density in its sale of 6.55 acres at Bluebell 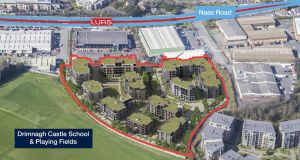 CGI of the proposed development, located about 150m from the Bluebell Luas Red line stop.

The busy run of sites for sale with planning approval for new apartment developments looks like continuing for some time. This week Marlet Property Group has made it known that it will offer for sale a site with planning permission for 358 apartments at Carriglea, Bluebell, Dublin 12.

The sale comes shortly after Marlet announced it was seeking a buyer for another ready-to-go site for 419 apartments in the north Dublin suburb of Cabra.

Selling agent Savills is guiding in excess of €12 million for the 6.55 acres in Bluebell, where the planners have approved 76 one-bedroom apartments, 219 two-bedroom homes and 63 three-bed units, as well as four commercial and community buildings, including a creche, gym and residents lounge.

The one-bed homes will have a floor are of 576sq ft; two-beds will fare better with 915sq ft; and the three-beds will extend to 1,140sq ft. The site also has planning for 358 car parking spaces at basement level.

The Marlet Group has sought permission for a higher density in Bluebell as a follow-up to planned changes in the building regulations. If the submission is successful, the overall capacity of the site could increase to 371 apartments in all.

The land is located about 150m from the Bluebell Luas Red line stop, which facilitates rapid access to the city centre. The planned development will also be adjacent to Lansdowne Gate apartments.

With such a strong apartment rental market, John Swarbrigg of Savills said he was expecting inquiries from both national and international developers because of the convenience of the location and its easy access to the Luas.