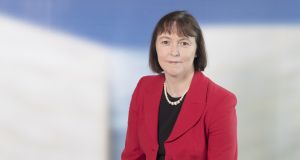 Sharon Donnery: “The full effects of this crisis will emerge over time.” Photograph: Jason Clarke

Central Bank deputy governor Sharon Donnery said on Wednesday that the low levels of cash held by small- and medium-sized enterprises (SMEs) before the Covid-19 crisis has led to increased risk of insolvencies.

“The scale of the shock is unprecedented, and we have only seen the initial effects of the economic shock. The full implications on households, businesses and the financial sector will emerge over the coming months and years,” Ms Donnery said in an Institute of International and European Affairs address delivered online on Wednesday

“Cash flow, or liquidity, is the main concern for many businesses. Half of large corporations hold less than 8 per cent of annual turnover in cash. Half of SMEs hold less cash and SMEs have less access to undrawn credit than their larger counterparts.”

While the Government stepped in to provide support with wage subsidies and the deferral of tax liabilities and banks in the State have provided liquidity by offering payment breaks and lending, “the risk remains of liquidity turning to solvency issues,” Ms Donnery said.

Minister for Finance Paschal Donohoe announced €6.5 billion of measures in early May to help businesses deal with the unprecedented economic shock caused by the coronavirus pandemic. While the State is emerging from lockdown in phases, a key part of the Government package, a loan guarantee scheme for up to €2 billion of SME lending, remains subject to legislation.

Central Bank governor Gabriel Makhlouf said on Tuesday he was confident that passing enabling laws will be a priority for a new government, as Fianna Fáil, Fine Gael and the Green Party prepare to enter coalition more than four months after an inconclusive general election.

The Central Bank estimated in April that SMEs would need between €2.5 billion and €5.7 billion of financing over a three-month period to help them meet their obligations during the crisis and be in a position to drive an economic recovery.

Echoing comments contained in the bank’s biannual financial stability review, published on Tuesday, Ms Donnery said while the global financial system has become more robust in the past decade, only the initial effects of the Covid-19 shock have been felt so far.

“On the eve of the crisis, the financial system was stronger than a decade ago, but its resilience is not limitless, and its continued stability is being heavily supported by policymakers worldwide,” she said.

“The full effects of this crisis will emerge over time as the damage and scarring to sectors is realised, and the extent depends on the path, persistence and waves of the virus and the necessary public health responses.”