Business This Week: Irish air-traffic figures will show difference a year can make 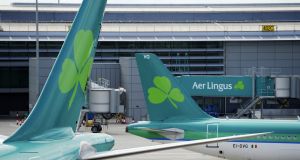 DAA, the company that runs Dublin Airport, is due to publish its annual report and financial results for 2019 in the coming weeks. Photograph: Aidan Crawley/Bloomberg

How times have changed in airline industry

On Thursday, figures for Irish air traffic in the fourth quarter of 2019 will complete the picture of a year in which the industry was thriving. How times have changed.

The comparison between this year and last will be stark, in an era in which the coronavirus has grounded flights, led to the loss of jobs and slashing of wages. Will the sector ever return to its previous might?

In the first nine months of 2019, 29.5 million passengers travelled through the main Irish airports, an increase of 5 per cent.

The performance level of 2019, as with other years, hit several financial targets and triggered “profit share, gainshare and performance-related” payments to staff from DAA (the company that runs Dublin Airport).

Although Dublin remains open to handle cargo flights and other vital services, it is now an aviation ghost town – at the end of March passenger numbers had plummeted 90 per cent and there is no indication yet of that changing.

DAA is due to publish its annual report and financial results for 2019 in the coming weeks.

The property market has been stalled like everything else by the coronavirus pandemic and it will be some time before it becomes clear exactly what long-term effects it has.

On Friday, the Central Statistics Office publishes its residential property price index giving a detailed glimpse at trends in Dublin and nationwide but this is only for February, when the potential threat of the virus was only just beginning to enter the collective conscious.

“It is unclear what effect the outbreak will have on prices in the short term, but much slower than forecast economic growth and the recent jump in unemployment can only be detrimental to the market,” said DNG’s director of research Paul Murgatroyd, following the publication of its quarterly report on the residential market.

This was markedly down on the 5.2 per cent increase recorded in the 12 months to January 2019, and that pattern is likely to be cemented, to say the least, by the ensuing global economic slump.

In Dublin, residential property prices increased by 0.5 per cent in the year to January.