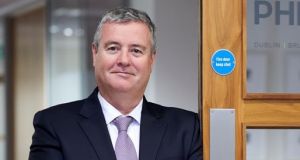 John Given, a partner with law firm Philip Lee. He has urged the Government to make temporary changes to the insolvency laws to prevent businesses unable to meet debts due to the coronavirus from going into bankruptcy.

The Government has been urged to make temporary changes to the insolvency laws to prevent businesses unable to meet debts due to the coronavirus from going into bankruptcy.

Dublin-based legal firm Philip Lee said certain aspects of the regulations here needed to be “dialled down” to enable companies trade through the current crisis.

In particular, it called for the penalties for trading while insolvent to be temporarily lifted. This would allow directors of companies to pay staff and suppliers even if there are fears the company could become insolvent, it said.

Currently, directors have personal liability for debts incurred and/or may face disqualification if they are knowingly party to carrying on a business that is insolvent.

Philip Lee’s John Given said directors making bona fides decisions to continue trading “in the expectation that the current crisis can be weathered” should not face such penalties.

He said Covid-19 had profound implications for many sectors of the economy and there can be no doubt but that the government has moved quickly to introduce some measures to protect employment,

“However, more needs to be done to protect the corporate community, including an easing of certain features of insolvency laws to give companies the best chance of survival until the recovery takes hold,” he said.

The company also called for the period within which a debtor must respond to and discharge a statutory demand be extended from 21 days to six months to give companies more financial breathing space.

As part of its Covid-19 stimulus package, the Australian government temporarily removed the potential for directors to incur personal liability for continuing to trade a company while insolvent.

“So directors in Australia are temporarily freed from risks of incurring personal liability and can focus on job preservation,” Mr Given said.

He also noted that Australia had extended the time limit for a company to comply with a statutory demand to pay an undisputed debt from 21 days to six months “thereby further protecting companies from liquidation processes”.

The UK has announced similar moves. “We should also consider exempting liquidators from being mandated by law to consider restriction and disqualification orders against companies that end up in liquidation arising from the impact of Covid-19,” Mr Given said.

“If we are serious about protecting jobs, then we need to also take some of the pressure and risk away from directors to continue to trade and protect jobs.”

The retail and hospitality sectors are among the industries most likely to see a spate of bankruptcies as a result of the Government’s measures to slow the spread of the virus.

Industry groups have highlighted the cash flow pressures being placed on firms because of the lockdown and have called for greater forbearance measures.