Boardroom bloodbath averted, can Malin finally deliver on its promise? 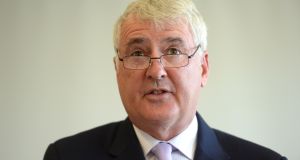 Can Ian Curley save the day at Malin? Photograph: Dara Mac Dónaill

Call it a case of shareholder activism that couldn’t be bothered with the sea view.

State-backed life sciences investment firm Malin Corporation’s annual general meeting (agm) on Wednesday - in a room on the third floor of the Royal Marine Hotel in Dun Laoghaire that offered a breathtaking vista across Dublin Bay to Howth - had all the ingredients for a testy affair.

Formed by former Elan executives, Malin raised €330 million in its March 2015 flotation with the simple aim of investing in a small portfolio of promising companies and keeping its own costs down to a minimum. It has disappointed on both fronts.

But while the shares wallowed 50 per cent below their initial public offering (IPO) price - leaving the Ireland Strategic Investment Fund (ISIF), for one, well under water on its €50 million investment - not one question was asked of the board by the small gathering of shareholders at the agm.

In reality, however, major shareholders such as UK-based Woodford Investment Management, with a 23 per cent stake, and ISIF had already made their point: voting by proxy to reject Malin’s eye-watering executive pay and severance plans. Some 27 per cent also voted against the re-election of chief executive, Adrian Howd.

Behind the scenes, major shareholders have been even more assertive, presiding over a boardroom shake-up in mid-July that saw a number of non-executives quietly depart and the instalment of Ian Curley, the former chief executive of Ardagh Group and one-time finance chief at Smurfit Kappa, as chairman.

Sources said that the Woodford, led by once-untouchable financial guru Neil Woodford, whose flagship equity income fund has been grappling with its own issues of poor performing holdings and investor withdrawals in the past 12 months, turned up the heat on Malin this year.

It’s understood that Woodford and some other major shareholders had plotted a boardroom coup that would see Malin’s co-founder John Given return to the fold. Given, a former general counsel to Elan and senior A&L Goodbody corporate partner, resigned suddenly as chairman at the end of 2016. He was known to have been perturbed at the time by the company’s deviation from its original strategy.

(Malin chief executive Kelly Martin - the former head of Elan and erstwhile Merrill Lynch investment banker - would step down himself in October last year, with a €3.2 million golden handshake, albeit negotiated down from the €6.5 million to which he was entitled.)

The appointment of Curley as chairman has averted a bloody boardroom coup. What he lacks pharma experience is more than made up for with his expertise in capital markets and the allocation of capital.

The early signs are hopeful. Last week, Malin announced that it has decided to focus on four investments with the most potential, leaving the other 14, some of which have been heavily written down, facing possible disposal. The company insists there will be no fire sales.

The key investments are stakes in: Poseida Therapeutics, which is developing a treatment for bone marrow cancer that has recently had promising early clinical study data; Immunicore, whose key pipeline product is an eye cancer drug; Kymab, which is working on a treatment for eczema; and Viamet, focused on antifungal products.

Curley knows a thing or two about an IPO failing to deliver on initial hopes. Within 19 months of Smurfit Kappa’s flotation 11 years’ ago, its shares had slumped more than 90 per cent amid fears the heavily indebted cardboard box maker would be engulfed by the financial crisis.

Smurfit made it through the crisis by redoubling its efforts to communicate with shareholders. Malin’s plans to hold its first investor day - or capital markets day - in November has Curley’s finger prints all over it.

He’s got his work cut out. Malin’s €232 million market capitalisation stands at a 42 per cent discount to the value the company puts on its investments.

Analysts at Davy indicated in a recent note to clients that Poseida - in which Malin has a 33 per cent stake worth €99.4 million - has the potential alone to underpin the group’s current share price. “We think that Malin can realise a significant multiple of its original investment the event of any IPO or trade sale of Poseida,” they said.

The stock market seems to be holding out to see the money.

Ten years ago this weekend, as US officials and Wall Street executives battled in vain to save Lehman Brothers from collapse, AIB chartered a plane to take 80 clients on an all-expenses-paid junket to the Ryder Cup in Kentucky.

The hubris was startling, coming weeks before taxpayers were forced to step in and guarantee the banking system. AIB would subsequently require a €20.8 billion bailout.

We’re glad to report that the good times are back, with word reaching us that the bank is set to bring another group of clients to the Ryder Cup at the end of this month, at Le Golf National in France.

Sources have been eager to point out, however, that only 10 private banking customers stand to benefit this time, that it’ll be a one-day job, and they’ll have to slum it on standard commercial flights.

It’s all just short of asking the clients of bringing their own flasks of tea and tin-foil-wrapped ham sandwiches.