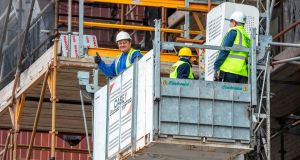 A construction worker poses for the photographer as he works on a site along the quays in Dublin city centre yesterday, as Ireland cautiously began lifting it’s coronavirus lockdown. Photograph: Paul Faith/AFP via Getty Images

Banks are still responsible for the majority of home repossession actions in the State, according to major new research from NUI Galway. Peter Hamilton has the details.

Reports from around the country suggesting customers were giddy to be going back to retail outlets once they reopened yesterday undoubtedly lifted the spirits of shopkeepers who have been in a Government-enforced lockdown for the past number of weeks. But talk of a swift return in consumer spending is premature, argues Cantillon.

A prolonged global recession brought about by the impact of Covid-19 is considered a greater threat to the world over the next 18 months than a fresh outbreak of the disease, according to a study by the World Economic Forum. Mark Paul has the details.

Ryanair shares surged almost 16 per cent on Monday despite the group predicting that it would lose €200 million in the three months to the end of June. Barry O’Halloran reports

What will happen to news consumption after the pandemic? Laura Slattery ponders this question in her media and marketing column.

In Q&A, Dominic Coyle looks at the potential tax implications of someone selling a property to their sister at below market value.

In personal finance, Laura Slattery looks at share trading: the choices, the charges, and the risks.