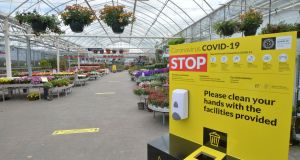 “We’ve lost the critical two months of the year. Paint would be a big part of our business and we’ve lost a big chunk of that.” Photograph: Alan Betson/The Irish Times

Businesses outside of Dublin reported “giddiness” among their customers as they reopened after the Government lifted restrictions in line with plans as part of the first phase of restarting the State’s economy.

Paraic Horkan, co-owner of Horkans Garden Centre, said the company’s outlets were seeing “an increase in customer numbers compared to a typical Monday in May”.

Castlebar, Co Mayo headquartered Horkans has four stores across the Republic. Mr Horkan said the group was seeing pent up demand, but noted that the company also has a strong online presence which went “ballistic” once the lockdown was announced. “Within the Horkans Group we have 160 staff and none of them were laid off. We redeployed our team to do online fulfilment,” Mr Horkan said.

Motor group Johnson & Perrott, the motor dealership arm of which is in Co Cork, had been in contact with customers last week to advise them that their service operations would restart this week. The company, which sells eight different car brands, has seen a busy start to the week, its chief executive, Mark Whitaker, said.

Over the course of the past few months, the company’s queries were rerouted to staff working from home, “but there’s no doubt that as the pandemic started to gain momentum, new car sales did fall. It will take a little bit of a while to regain momentum,” Mr Whitaker said.

Nevertheless, he said: “it was wonderful to see people arrive this morning with enthusiasm and delighted to be back to work. We’ve taken additional measures around sanitising cars at the site when they arrive and when they’re to be taken back by customers.”

Expert Hardware, which has stores across the country, many of which are in rural locations, also saw pent up demand across its estate of 50 outlets on the day. “Paint is the big seller,” said Gerry Fallon, the company’s chief executive. The extent to which the group can make up lost ground is limited, however.

“We’ve lost the critical two months of the year. Paint would be a big part of our business and we’ve lost a big chunk of that. The weather has been good which has been positive but for a business it’s a bad time to be closed,” said Mr Fallon.

Expert Hardware’s stores have been working behind closed doors since lockdown measures were imposed.

Mr Whitaker of Johnson & Perrott agreed that business wouldn’t return immediately. “A lot of the work done over the summer will be around building a pipeline for 2021,” he said.

Across the Horkans Group, Mr Horkan said the company forecasts that business will be busy for the foreseeable future with people cocooing at home and with “spare cash”. “We’re seeing a big uplift in plants and lifestyle products like barbecues, garden furniture. The weather has been relatively good and people are looking to extend their home life into their garden,” said Mr Horkan.

From Monday, garden centres, farmers’ markets and other outdoor retail settings were allowed reopen, along with opticians, motor and bicycle repair shops and phone repair shops.

But the number of customers entering stores is limited in line with Government guidelines. Mr Horkan noted that in the company’s bigger stores, 50 people are allowed in at any one time whereas only 15 are allowed in smaller stores.

“The customers are very functional – they’re coming in with a list and leaving. The dwell time has gone down,” Mr Horkan said.