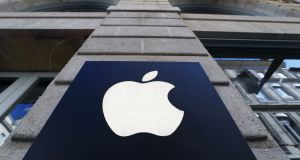 There’s no change at the top in this year’s Irish Times Top 1000 2019, the definitive guide to Ireland’s leading companies, as Apple, with turnover figures of almost €120 billion for its Irish operation, continuing to dwarf every other company which operates, or is headquartered, in Ireland.

Yes, the US gadget giant is by far and away Ireland’s largest company, although it should be noted that the company, which recently made a larger leap into services, has not updated the figures for 2018, so the ones we are using are those which emerged as part of a European Commission investigation into its tax affairs. This process revealed that Apple puts all its sales outside of the US through Ireland, hence the scale of its Irish related sales.

Overall, it was a good year for Ireland’s Top1000 companies. They reported gross sales or revenues of a staggering €686 billion in their most recent financial years, up by 10 per cent on last year’s survey. This means that sales generated by Top1000 companies, which includes sales transacted from Ireland by multinationals such as Microsoft and Facebook, as well as global sales for multinationals that are headquartered here, such as CRH and Allergan, are far in excess of the income Ireland as a country is generating. Indeed, Irish GDP stood at about €319 billion in 2018; Top1000 companies on the other hand, generated revenues of almost €700 billion in total.

And they are also very profitable. Profits of Ireland’s leading companies, including those in the financial services sector, stood at some €35.3 billion in this year’s survey, although this is a slight decline on last year, when net profits of some €36.3 billion were reported. When one considers the omissions to this figure - many of the larger multinationals, including Penneys, Intel, IBM and Apple - don’t disclose profit figures for their Irish operations - it’s clear that the true figure must be some way north of €35 billion.

Banks are once again contributing heavily to Top1000 profits. In years gone by, many financial companies were languishing in the red in the aftermath of the financial crisis. Today however, out of our 75 financial companies listed with profit details on pages 52 and 53, just eight, or 11 per cent of the total, reported a loss in their most recent financial year.

Returning to the Top 10, we find there is much change away from the top spot. US internet giant Google has rocketed up into second place, having slipped back to fourth last year. However, with revenue growth in Ireland of some 22 per cent over the year, bringing sales for its Irish operation up to €32.2 billion, it is now Ireland’s second largest company, according to this year’s survey.

This means that CRH, the country’s largest indigenous company, has slipped back to third place, on revenues of some €26.8 billion.

Also going down is Microsoft, which has fallen back to seventh place in this year’s survey. The US software maker was once as high as second in the Top 1000 survey, but revenues have fallen back slightly at its Irish operations, which employ some 2,000 people, in recent years.

Global companies which shifted their international headquarters to Ireland in recent years also feature strongly on the Top 10 list, and include Medtronic (4); Eaton Corp (5); Allergan (9) and Ingersoll Rand (10).

Who’s making the most money? And who’s still in the red?

As companies continue to reach record revenue levels, profits too are on the rise, which means that it’s becoming increasingly difficult to break into the Top 10 most profitable companies. This year has a minimum requirement of €1.2 billion in pre-tax profits, up from €991 million last year, which means that regular names on the list, like Microsoft, don’t make the cut this year.

Of course just like many companies on the list, Medtronic does not generate most of these profits in Ireland; they’re derived from its global business, which is headquartered in Ireland, just like third placed pharma company Shire, headquartered in Dublin’s Clonskeagh, which reported profits of some €2.4bn last year. Whether it will remain Irish headquartered remains to be seen however, following its takeover by Japanese pharma group Takeda late last year.

A regular on the list is the Central Bank and this year is no exception. It has once again taken the number two spot on profits of €2.6 billion, although the regulator did say last year that it expects profits to normalise - ie decrease - over time.

Breaking into the Top 10 for the first time is professional services firm LinkedIn, which reported profits of some €2.3 billion in 2017, its most recent financial year.

But not all companies are making profits; some companies either slipped, or remained, stuck in the red last year.

Two pharma companies top the list, illustrating the stark difference in fortunes that can hit companies in this sector. Allergan tops the list with a loss of €6.1 billion for 2018, as the company was hit by a combination of factors including losing exclusivity on one of its top selling products, Restasis.

Elsewhere, Irish manufacturer Smurfit Kappa also makes the list, with a loss of some €404 million, on the back of turmoil in Venezuela.

With cranes firmly back in the skies over Dublin, and new development figures up across all sectors, the construction sector appears to have bounced back. Or at least some of it has.

Insulation manufacturer Kingspan has grown its revenues by 19 per cent, with profits up as well. Other strong performers include the privately held Mercury Engineering, which, after a stellar number of years, saw its turnover hit €770 million last year. Not so long ago, Jacobs Engineering, the Dublin based engineering group which last year led a consortium that won a €14 million contract connected with the Dublin MetroLink project, was reporting revenues around the €200 million mark. But last year significant growth saw it approach annual turnover of some €450 million.

New homes developers Cairn and Glenveagh are also growing strongly, with revenues at the former jumping almost three-fold to €150 million.

Despite the recovery, some construction companies struggled last year. Sammon Contracting, the Kildare based company which specialised in building schools, among other private and public sector projects, ran into trouble when UK contractor Carillion collapsed. Sammon had been working on a related school building project, which was subsequently suspended, sending the firm into examinership. However, the company failed to exit this process and went into liquidation in June with the loss of about 200 jobs.

Another construction company which struggled is Kildare based MDY Construction. The company was involved in the building of hundreds of social and affordable housing units, but got into difficulty when it became unable to pay its debts. It went into examinership in September of last year.

The UK’s departure from the European Union may still be up for negotiation, but financial services companies have been ramping up Irish operations ahead of it.

Indeed a report from Knight Frank in March showed that Dublin remains at the forefront of the race for business emanating from the UK, far ahead of Luxembourg, Paris, Amsterdam and Frankfurt. The survey showed that asset managers and insurers accounted for more than half of the moves recorded in Dublin, but the city has also attracted banks and fintechs. And the survey also found Cork and Sligo had attracted six Brexit related projects.

On the banking side, Bank of America, Merrill Lynch and Barclays Bank have big plans for their Dublin operations, with the former reversing years of retrenchment by announcing plans late last year to position Dublin as the company’s main European banking entity, operating through branches in Amsterdam, Brussels, Frankfurt, London, Madrid, Milan, Paris and Zurich. This may yet see the bank, which was once one of Ireland’s largest, make its way back up the ladder from its current position of 41st.

UK bank Barclays is expected to move about €250 billion in business to Dublin as part of its Brexit plans. And the impact of US bank JP Morgan’s plans for Dublin can be felt in this year’s survey. The bank has doubled the assets its Dublin based bank holds, up to €1.9 billion, pushing the bank up from 68th place in last year’s survey to 54th this year.

On the life assurance side, the flow of business has been more low key but still significant, with most life assurers reporting an increase in the value of assets they hold here.

Some, such as the Scottish financial group Standard Life, have announced big plans for Dublin. It’s set to move almost €19 billion in assets to its Dublin office to ensure continuity of service for Irish customers when the UK leaves the EU. It will mean a big boost for Standard Life International, which will now be in charge of about 600,000 Irish, German and Austrian customer policies, a move which will see its Dublin head count increase by about 20 people. It will also position the Scottish group as the third biggest life assurer in Ireland behind Irish Life and Zurich.

But others have been quietly growing. St. James’ Place International has grown sharply. Its Irish assets grew by 25 per cent to about €9.1 billion in this year’s survey, pushing it up from 34th place last year to 28th this year. Another strong mover is Utmost PanEurope, a subsidiary of UK-based Life Company Consolidation Group (LCCG) which last year acquired Generali PanEurope. The wealth management group has big plans for its Meath based operation, and has already seen its assets rise by 5.7 per cent in this year’s survey, growth which saw it rise up the rankings into 23rd place.