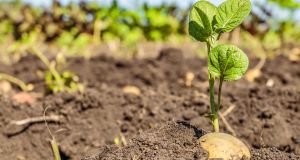 Donegal Investment Group has 30 proprietary potato varieties including names such as Rooster and Slaney. Photograph: iStock

Pre-tax profit at Donegal Investment Group, formerly Donegal Creameries, increased more than 4 per cent in its financial year but revenues fell as the company encountered challenges in its seed potato business.

Group revenue dropped €200,000 to €76.2 million for the year to the end of August with adverse weather having an impact on the company’s produce division.

Lower than expected yields resulted from poor weather conditions in the year which gave rise to a reduction in the availability of seed potato. That led to volumes sold being lower than planned in some key markets, the company said in its preliminary results announcement for the year.

However, some losses were offset by improved trading margins.

Revenue in the produce division dropped €3.8 million to €25.7 million as the company also restructured its Brazilian business and discontinued some local growing activities.

Donegal’s food-agri and property division delivered revenue of €50.3 million in the period with its Nomadic yogurt brand delivering double digit growth in the period. Additionally, animal feeds delivered a “strong performance”. driven by the reduced availability of fodder in certain farming areas.

“The board is satisfied with the performance of the group’s trading businesses during the year and the successful return of €45 million in capital to our shareholders in May 2018 which followed several years of work by the group on realising value for our shareholders from the sale of non-core assets,” said chairman Geoffrey Vance.

“As referred to in our most recent AGM announcement, the board commenced a strategic review to assess all suitable options available to the group, and resultant actions required therefrom, for the purpose of maximising long-term shareholder value. This process remains ongoing including in respect of our Nomadic business and the Group will update shareholders in due course and as appropriate.”

At the start of the year Donegal accepted a payment of more than €45 million after the sale of its 30 per cent stake in Monaghan Mushrooms. It subsequently returned €45.5 million to shareholders.

Following that return of capital the group had a cash position net of debt of €100,000 at the year end, down from almost €7 million in 2017.

On its future outlook, the company said all its businesses are “on plan” for the first quarter of the financial year.

“We remain confident of delivering a satisfactory performance in our produce seed potato business, but it is too early in the season to give full year guidance and therefore overall group performance,” said Ian Ireland, Donegal’s managing director.