Cantering at the speed of the economic demand for racehorses 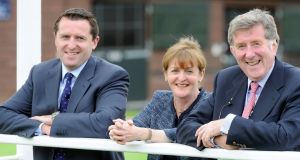 Ross, Anna and Peter Doyle: Doyle Bloodstock was shielded from the effects of the downturn by regional diversification and clients in France, Scandinavia and the UK.

The financial crash of 2008 sent shockwaves through the Irish bloodstock industry. The Celtic Tiger had seen swathes of new people become involved in racing and breeding – many especially in the construction sector – sending the industry into a frenzy of overproduction. In 2007, Ireland produced more thoroughbred foals than the combined total of Britain and France.

“A bit like in property where there were too many houses, there were just too many horses, you know, it was all very similar,” says Ross Doyle, a director of Doyle Bloodstock, a thoroughbred racehorse purchasing agency, alongside his mother and father, Anna and Peter.

The effects of the downturn, coupled with the results of years of overproduction, meant the industry was hit hard. Levels of abandonment spiked as many newcomers in the industry rushed to the exits. And sales collapsed – the two years to 2009 saw a 65 per cent drop in public sales volumes.

“[Bloodstock agents] who had clients in the construction business [in Ireland] would have found it difficult,” says Anna. “A lot of the big developers just disappeared.”

Doyle Bloodstock was largely shielded from the effects of the downturn by its regional diversification. Its business had expanded to focus more on clients elsewhere in Europe – in France, Scandinavia and especially the UK – and less so on the Irish market.

“We were lucky,” says Ross. “We’d a lot of English clients and they weren’t as adversely affected.”

The company was founded in 1983 by Peter and Anna Doyle. Peter’s father Jack had already had a successful 60-year career in the industry.

The focus of the business is buying thoroughbred racehorses – foals, yearlings, horses in training, broodmares and stallions – for clients, both at public auction and privately. The three operate as a team, viewing horses alongside a handful of spotters employed by the company.

“We’re scouting for talent the whole time, equine talent,” says Ross. “You’re narrowing down the horse, the physical specimen [all the time].”

The company started life as “a real kitchen table company”, according to Anna, but travelling globally to develop partnerships with trainers and a client network saw it grow throughout the early 1980s.

The recession in the late 1980s hit Doyle Bloodstock hard. Being more focused on the Irish market then than it would be 20 years later, it did no private business, outside of public auctions, for two years.

In an industry heavily tied to the general performance of the economy, highs and lows are commonplace. When times are good, many people from outside the industry become involved in breeding and racing.

“It’s a pleasure for those people to race, it’s a hobby basically,” says Peter. But when times are bad, the same newcomers flock to the exit. As with the recent recession, levels of abandonment spiked in the 1980s too, with people unable to afford to continue keeping horses.

“Someone might buy a foal. They’d pick the foal up and they’d go back to the box and someone might have put another foal in there that they couldn’t afford to take home,” says Ross.

“The horse business is very much peaks and valleys. We’ve seen it repeatedly,” says Anna. “During a time when business in general is down, the number of people buying bloodstock would probably come down as well.”

“I suppose it’s about being able to survive,” she adds.

The family slashed costs wherever they could. Staff were asked to work a three-day week and the company clamped down on credit control.

“One of the biggest expenses we have is travel. So we looked at all that and we had to make sure that every piece of travel was necessary,” says Peter. “But we got through it.”

The industry recovered in the following years and a number of successful and enduring partnerships saw the company move from strength to strength, most prominently with four-time champion British trainer Richard Hannon, whose son, also Richard, now works closely with Ross, who joined his parents in the business in 2001.

Race results, the key measure of success for bloodstock agents, went well, with an average of more than 200 wins a year since 2002.

“Your horses are your biggest advertisement. So, if the horses do well on the track, it gets publicity,” says Anna.

Brexit is the next challenge on the horizon for the business, and for the industry as a whole, though making contingencies for it is difficult.

For now, though, it’s business as usual as the family business worked through the recent auction season with public sales on the horizon in the US, France, Ireland and Britain.

“We’ll be doing a lot of the same I suppose. Hopefully, the results will keep flowing and generate some new business,” says Ross.