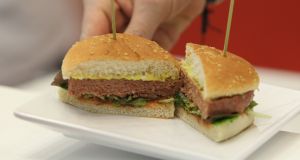 MEPs have been divided over banning the use of traditional meat terms for vegetarian and vegan products. Photograph: Daniel Roland/AFP via Getty

The European Parliament has voted by 379 to 284 to reject a proposed ban on using meat terms for vegetarian products such as vegan “burgers” or “sausages”, facing down demands from a powerful farming lobby.

But MEPs voted in favour of another proposal to end the use of dairy descriptions for vegan items, such as “butter substitute”, “imitation cheese” or “yogurt style”, in a move that hardens restrictions on names for vegan alternatives following a previous EU ban on terms such as “soy milk” and “vegan cheese”.

The dairy proposal passed by 386 votes in favour to 290 against, including support from Fine Gael MEPs Deirdre Clune, Frances Fitzgerald, Maria Walsh and Seán Kelly.

The measures had been pushed by a powerful agricultural lobby that argues such names are confusing to consumers and do not respect the work of farmers, at a time when meat and dairy-free alternatives are increasingly prevalent on supermarket shelves and popular among health and environmentally conscious consumers.

Green groups welcomed the defeat for the meat industry but castigated lawmakers for approving the dairy amendment.

“It’s pathetic that the parliament wouldn’t even stand up to the industrial agriculture lobbyists on this,” Greenpeace EU agriculture policy director Marco Contiero put in a statement.

“The votes won’t change the fact that more and more people are eating more vegetables and switching to meat and dairy alternatives for the sake of their health and the environment, and will continue to call dairy-free products ‘yogurt’ and ‘cheese’ anyway.”

The decisions are an intermediate stage in policy-making, and are still subject to final agreement with member state governments, which have not made a so-called “veggie burger ban” part of their position.

The proposal is supported by France, however, which passed similar laws domestically earlier this year.

The votes are part of the process by which European Parliament agrees its common mandate for negotiations with the member states, which will set agricultural policy across the bloc for the next seven years.

A 2019 survey of the public by consumer organisation BEUC found that only 20 per cent of respondents objected to the use of meaty names for vegetarian foods, with a clear majority saying they did not mind the practice.