Wetherspoon to cut jobs after plunging to annual loss 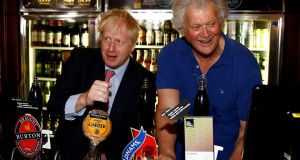 The head of British pub operator JD Wetherspoon warned on Friday of the threat posed to his industry and the wider economy from measures to try to contain the coronavirus, after the company sank to an annual loss.

The statement follows Marston’s announcement of up to 2,150 job losses earlier this week, and warnings from pub bosses across northern England that the latest round of restrictions will wipe out their businesses.

“The company and the entire hospitality industry need a more sensible and consistent regulatory framework in which to operate,” said Wetherspoon’s chairman Tim Martin, who has been an outspoken opponent of coronavirus restrictions for much of this year.

“The current environment of lockdowns, curfews and constantly changing regulations and announcements threatens not only pub companies, but the entire economy,” he added.

Wetherspoon employed about 43,000 people at the end of its last financial year and had already said it would cut up to 130 jobs at its head office and 400 to 450 employees at airport concessions.

Shares in the company, which have already sunk this year, were expected to fall another 3 per cent at opening.

Mr Martin, quoting business scion Warren Buffett from 1989, said governments across the world have based their lockdown decisions on “deeply flawed analysis” and attacked politicians and the media who reported that the company was considering withholding wages at the start of lockdown – a decision that was eventually not taken.

He added that like-for-like sales in the 11 weeks since July 26th have been 15 per cent below those of last year, with strong sales in the first few weeks, followed by a marked slowdown since the introduction of a curfew and other restrictions.

Mr Martin renewed his attack on the British government, claiming that the UK should adopt the Swedish model for pandemics to allow his pubs to open again properly.

He said it was unfair that pubs have been treated more harshly than supermarkets as he revealed sales fell from £1.82 billion to £1.26 billion in the year to July 26th.