Total Produce increases US presence with 50% stake in Californian firm 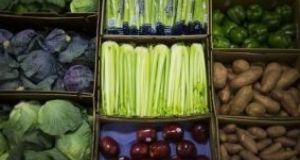 Food distributor Total Produce, which spun out of Fyffes in 2007, has been on the acquisition trail of late

Total Produce, which has been busy increasing its presence in North America, has acquired a 50 per cent stake in California company The Fresh Connection.

Founded in 1994 and headquartered in Lafayette, the company exports fruits and vegetables to customers in more than 35 countries. It had sales of €165 million last year.

No financial details of the deal have been disclosed.

“This transaction further broadens our US presence and provides us with strategic access to other key markets,” said Total Produce chief executive Carl McCann.

The food distributor, which spun out of Fyffes in 2007, has been on the acquisition trail of late, particular in North America. In March the company announced it had upped its stake in the Canadian firm Grandview Ventures to 65 per cent.

1 Explainer: what is the row about SF’s multinational tax plan?
2 Pensions: Estonia plans to unleash a potential €4.85bn on economy
3 Getting out from under ‘never-ending’ Celtic Tiger debt burden
4 Britain after Brexit will not be alone, but it will be lonelier
5 Personal insolvency practitioner to pay €6,000 after providing misleading details
6 Banks withdrawing from ATMs – another failure of regulation
7 More affordable iPhone 11 is unlikely star of Apple earnings
8 Election 2020: Parties' pledges on housing simply don’t add up
9 Brittany Ferries announces new services to Spain and France from Rosslare
10 Fair Deal nursing homecare leaves little for bills and gifts
Real news has value SUBSCRIBE