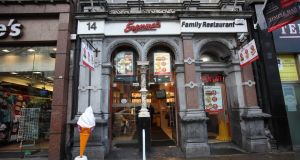 Supermac’s and the hotel group founded by its owners plan to add 300 jobs this year with new fast food outlets opening and a major refurbishment of the hotel properties.

The Supermac’s and SÓ Hotel Group, founded by Pat and Una McDonagh, are adding the jobs through the opening of new Supermac’s restaurants in Wexford, Waterford and Kinnegad, Co Westmeath and the refurbishment of the Athlone Springs Hotel, the Castle Oaks House Hotel in Limerick and the Killeshin Hotel in Portlaoise.

Additionally, the group said on Wednesday that a further 300 jobs could be created across Letterkenny, Longford, Ennis and Portlaoise subject to planning permission.

Mr McDonagh announced a refurbishment programme of some of the newer hotels in his SÓ Hotel Group. The company plans to spend €1.5 million on the Athlone Springs Hotel and is committing a further €500,000 investment to upgrade the Killeshin Hotel in Portlaoise.

It is expected the group will invest about €1.5 million in the Castle Oaks House Hotel which it bought before Christmas.

“We will be engaging in a major recruitment drive to get staff for these new openings in Supermac’s and the hotels,” Mr McDonagh said.

“We have career opportunities at all levels. We are looking for staff in the area of managers, chefs and a variety of retail and catering opportunities.

“We put structured career paths in place and we are looking for people that want a career – people that will stay with us and develop with us,” he added.

The Minister for Business, Enterprise and Innovation, Heather Humphreys, said: “This significant job announcement today by Supermac’s and the SÓ Hotels Group is a great example of what our local indigenous businesses can achieve and is a huge vote of confidence in Ireland’s regions; we can and must continue to build on this success.”

Supermac’s has 116 outlets and employs more than 4,000 staff across the Republic, having opened eight new outlets in 2018. Its sister four-star SÓ Hotel Group also comprises the Lough Rea Hotel and Spa, the Castletroy Park Hotel and the Charleville Park Hotel.

In January, the fast-food group won a battle to force burger giant McDonald’s to relinquish its “Big Mac” trademark in Europe. The company said the judgment opened the door for expansion into the UK and Europe.

A spokesman told The Irish Times that while that expansion is yet to get under way, with an internal meeting this week to determine how the company proceeds.