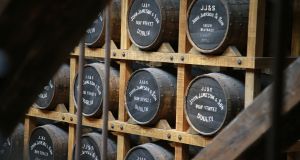 Covid-19 lockdowns are hitting Irish whiskey sales while about 400 of the industry’s jobs are in the balance, distillers warn.

“The challenges are particularly stark for many smaller and new-entrant companies.”

In addition, he said that many of the 409 people working in distilleries’ visitor centres are on the Government’s Covid-19 wage supports while these attractions are closed.

“Some have been redeployed, some are on wage supports, but the picture changes from day-to-day, our members are trying to keep their workers employed,” he said.

Most of the 1,000 workers employed in producing the whiskey are still working, according to Mr Lavelle.

The Irish Whiskey Association, which is linked to Ibec industry group Drinks Ireland, registers distillers and ensures that they are producing whiskey according to the legal guidelines for stilling the national drink.

Mr Lavelle said that the association was finalising plans to boost sales in key markets including the US, Canada and Ireland.

Drinks Ireland is seeking aid from the Government and Northern Ireland executive to pay for marketing graduates to help increase sales of whiskey in these markets over the next 12 months.

The organisation wants both administrations to provide up to 70 per cent of the cost.

Mr Lavelle pointed out that there was already precedent for 70 per cent support. “That’s not a number we have just made up, we think it’s appropriate,” he said.

He argued that the industry would need to “reboot” Irish whiskey sales once the crisis had passed. “It will also provide employment for marketing graduates,” Mr Lavelle added.