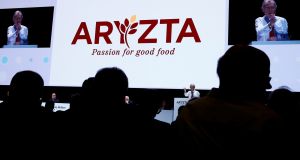 Cobas, Aryzta’s largest shareholder, has been pushing for changes since at least 2018. Photograph: Arnd Wiegmann/Reuters

Swiss-Irish baked goods group Aryzta has announced a strategic review of the company on foot of another slump in its market valuation.

The company behind Cuisine de France bread and doughnut maker Otis Spunkmeyer said it appointed financial advisory group Rothschild & Co “to undertake a review of all strategic and financial options available to the group to maximise value for the benefit of all of the group’s stakeholders”.

The move comes as Aryzta shares fell to another record low of 33 cent in Dublin on Wednesday and to 0.35 Swiss francs in Zurich, leaving the company with a market value of €350 million. The company’s stock has fallen by roughly 98 per cent over the past five years.

A spokesman said the review was initiated by the board with external input to address the decline in shareholder value. It is expected to be concluded by the end of July.

Aryzta has been struggling to halt a steep slide in its share price, which investors have linked to the group’s highly indebted and complex capital structure as well as ongoing problems with its US business.

The coronavirus crisis has added to its woes, particularly in the US where about 70 per cent of its business is tied into quick-service restaurant chains, most of which have been forced to close because of the lockdown.

The announcement of the review comes as activist investors Veraison and Cobas Asset Management teamed up to call on the company for more changes to help boost its share price.

“The two shareholders have joined to actively support improvements in the company,” Swiss-based Veraison said in a statement. “Trust in Aryzta must be rebuilt. Only in this way can Aryzta create value for all stakeholders again.”

Between them the two groups control around 17 per cent of the stock.

They said they believe that the company is trading at a significant discount to its intrinsic value and, despite a capital increase in 2018, the company’s market valuation decreased significantly compared to the overall market.

Among other things, they called for reducing the complexity of the group and more-focused activities. Cobas, Aryzta’s largest shareholder, has been pushing for changes since at least 2018, as the bakery company’s stock has fallen about 98 per cent over the past five years.

Led by former DAA boss Kevin Toland, Aryzta said earlier this month is had secured a “precautionary amendment” to its financial covenants and outlined a number of steps taken to maximise cash and reduce costs to deal with the Covid-19 pandemic.

The company also said it had improved its liquidity position to in excess of €385 million at the end of April, compared with €360 million a month earlier. – Additional reporting by Reuters