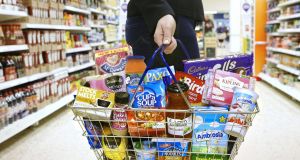 Premier Foods, producer of Oxo stock cubes and Bisto gravy, lifted its full-year trading profit outlook again on Tuesday as it expects rising demand for its products during pandemic-led restrictions on eating out.

The group, which also owns the Mr Kipling cakes brand, expects “continued revenue growth” in the second half, after double-digit growth from key brands in the first half.

New products will help drive up revenue, as will heightened demand for existing products while restaurants and pubs are closed during lockdowns to control the spread of coronavirus.

The company has also been stockpiling certain top-selling lines and raw materials before the transition period following Britain’s exit from the European Union ends on December 31st.

“We’ve been making sure we’ve got all the materials, we’re keeping stock levels as high as we can and our warehouse is full,” chief executive officer Alex Whitehouse told reporters on a call.

It was the second time the company has lifted its profit outlook since the start of the financial year in March.

Shares in the company have soared 170 per cent this year but fell back 5 per cent on Tuesday after initially rising on the results.

The company said its Bisto, Batchelors, Oxo, Ambrosia, Sharwood’s, McDougall’s and Nissin brands all reported double-digit revenue growth for the first half, and that it will be launching more cooking products.

“The renewed lockdown is likely to extend the positive performance in the short term, but we see potential for some of the themes to be longer lasting, with more people working from home, increases in cooking from scratch, greater online penetration and a stronger base for growing International,” Peel Hunt analysts said.

Premier Foods, which in June had expected profit to exceed estimates for the year, said trading profit rose 28.7 per cent to £65.8 million (€74 million) for the 26 weeks ended September 26th, ahead of a company-supplied consensus of £62 million. - Reuters