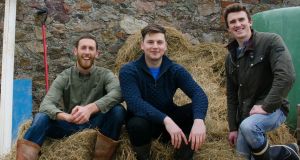 VentureWave Capital, which is behind a new €100 million fund for Irish technology companies, has announced its first investment, with €2 million going to healthy meal-kit delivery service DropChef.

In addition to the funding, VentureWave Capital co-founder Brian Martin is to join DropChef’s board as is broadcaster and former chairman of Insomnia, Bobby Kerr.

DropChef had seen a big rise in demand for its service even prior to the Covid crisis with revenues jumping 171 per cent in the first quarter. The pandemic has led to even bigger demand with the new financing to be used in part to expand the company’s menu offerings.

“We’ve been doing tens of thousands of meals a month and that number is continuing to rise. The growth we saw in one week alone early in the crisis was what we were hoping to achieve over a six-month period,” said Mr Scott.

The new financing will also be used to help DropChef achieve a number of other goals, including expanding its educational outreach programme which is aimed at steering people away from processed food and towards healthier eating.

“Part of our mission is to make cooking more accessible so it is seen as something that everyone can do. For younger people in particular, we want to help them understand where ingredients come from and how to use them. It is about educating and empowering them to eat better,” added Mr Grogan.

While meal-kit delivery services are only just taking off in Europe, it is big business in the US with companies such as Blue Apron leading the way. The global market was valued at $7.6 billion in 2019 and is expected to grow at a compound annual growth rate (CAGR) of nearly 13 per cent in 2020-2027 to nearly $20 billion, according to Grandview Research.

VentureWave Capital is now halfway to reaching the €100 million target for its Impact Ireland fund, which invests in Irish “tech for good” companies.

The private equity firm headed by Kieran McLoughlin, and co-founded by Mr Martin and fellow former Blueface senior executive Alan Foy, is aiming to take strategic stakes in up to 15 companies that are either originally from Ireland or which are prepared to relocate from elsewhere and grow their business here.

The fund is seeking investments that will generate a return for society as well as investors. It has said its focus is on backing profit-driven companies which also advance the UN’s Sustainable Development Goals.

“Consumers want to eat healthily but often can’t find convenient and environmentally-friendly options. DropChef solves this problem and we are delighted to be backing Ryan, Roman and Sam to help scale this rapidly expanding Irish business,” said Mr Martin.