O’Kelly brothers lead the way in nutrition software, with a number of high-profile clients 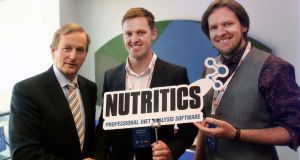 Damian O’Kelly’s business idea sprang from a sense of frustration. While studying nutrition at Leeds Metropolitan University, he was working with athletes training for the Commonwealth Games and using industry standard software to analyse their diets. But the programmes kept crashing, their databases were lacking and they couldn’t be accessed online or at home. Everything had to be done on the same computer.

“At the time, I couldn’t give these athletes back anything particularly useful,” says O’Kelly (28). “So I built my own database in Excel, typing in hundreds of food types, until I could break down their diets a lot better. That’s where Nutritics started.”

When O’Kelly returned to Dublin in 2011, he approached his older brother Ciaran (a computer programmer and graphic designer) about developing that database into something more advanced.

The pair began working on Nutritics from a bedroom in their parents’ house in Portmarnock until they had a basic version ready by March 2012. Once O’Kelly began using it with the Meath GAA team, word spread swiftly.

But demand for the software caught the brothers unprepared.

“We were clueless, to be honest,” says O’Kelly. “We were product-focused and just wanted to build something cool.”

For the first 12 months of sales, he adds, there was no business plan.

“We did a training series [Enterprise Ireland’s Hi-Start programme] and they said, ‘You’ve got customers. What’s your business background?’” He laughs. “We didn’t have any business background. I didn’t even know what a VC or an IPO was. Everyone was shocked that we were able to achieve what we had up until that point.”

That imbalance wouldn’t last long. Participating in HealthXL, an accelerator programme for digital health ventures based in Dublin’s Trinity Enterprise Centre, steered the brothers towards a solution.

One of the mentors there was Stephen Nolan, then a senior manager for Deloitte’s corporate finance advisory team, who believed in Nutritics enough to join as its chief operating officer.

Along the way, it became clear that the product held potential beyond the world of sport. Healthcare professionals, for instance, could use Nutritics to monitor patients’ nutritional intake and fine-tune their dietary requirements.

Caterers would be able to comply with EU regulation no. 1169, a new directive to provide clarity across all food labelling, by simply entering their ingredients into the system.

Since its official launch in May 2013, Nutritics offers a cloud-based subscription service that utilises the largest food database available in the UK and Ireland.

Pricing is tailored according to sector, size and usage, though individual plans begin at about €20 per month.

“It’s business-to-business, O’Kelly says, “so it’s not for the average person who’s trying to lose weight.”

Much of that client base has been built up through word of mouth, O’Kelly says, though it’s also been aided by the web presence that his brother Ciaran created around the company. “The other tools available were quite outdated, so people were actively looking for something else,” he says, “and they were able to find us pretty quickly.”

Learning to manage people and finances without prior training has thrown up plenty of challenges, O’Kelly admits, but he has nurtured the business carefully.

The company has never taken outside investment, nor has it ever lost a corporate client.

“Other people might say that establishing credibility in this space is hard but I think when you get the right early adopters on side, which we were fortunate enough to do, that happens organically.”

Since relocating from O’Kelly’s parents’ house to an office in Swords, Nutritics has tried to maintain that momentum by focusing on advertising and attending trade shows.

The company employs a staff of nine (six of whom are full-time) and the service is being used in 46 countries. O’Kelly is aiming to reach 50 by Christmas.

“In terms of revenue, we’ve grown by 700 per cent this year and we’re hoping to keep that up,” he says, before pausing. “That’ll be pretty challenging, obviously, but we’ve every reason to believe in ourselves.”