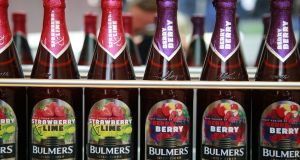 Bulmers maker C&C will apply for listing on the FTSE. Photograph: Nick Bradshaw

Bulmers/Magners owner C&C expects its new Five Lamps brewery on Dublin’s Camden Street to be completed before the end of this year as it gears up to extend the brand outside of the capital.

At its annual general meeting on Thursday, the drinks group told shareholders that the Five Lamps brand delivered 35 per cent growth last year.

Stephen Glancey, chief executive of the drinks group primarily known for its ownership of cider brands Bulmers and Magners, said C&C would gradually expand the beer brand to the rest of Ireland and would consider other geographies having received enquiries from the UK.

Mr Glancey, speaking on the subject of the cider market, told shareholders the company isn’t “unduly troubled” by competition in the sector, including from Heineken and Diageo in the form of Rockshore cider.

The AGM followed a trading update in which the company said it was planning to seek inclusion in London’s FTSE series, thus cancelling its Dublin listing. Mr Glancey explained the move was to cater to the group’s larger base of UK shareholders, which make up the majority of shareholders.

However, C&C will remain headquartered and tax resident in Ireland. “We’ll still pay more tax in Ireland than some of the international guys that compete with us...we’re just moving our listing to a much bigger market,” Mr Glancey said.

Asked about his Brexit plans, Mr Glancey said the company is “less panicked about October than we were about March” because C&C will stockpile in advance of Christmas anyway.

The company will shortly add to its portfolio with the launch of Bulmers Zero, a no-alcohol drink to rival Heineken’s beer product. They’ve also launched Bulmers Rosé to appeal to younger consumers.

“What’s happening in Ireland, people are moving to craft, speciality, things that are made locally and they want to know the ingredients, they want artisan products so it’s very similar to the UK,” he added.

The company continues to try and grow its US business, which it acquired in 2012 for €235 million. It has since written down the value of that business to about €45 million. Asked whether a sale was on the cards, Mr Glancey said “no”. The business, makes between $2 million (€1.8 million) and $3 million a year, he added.

Overall, the chief executive was buoyant on the business’s prospects after a “transformational year” in which it integrates the acquisitions of two distribution companies, Matthew Clark and Bibendum.